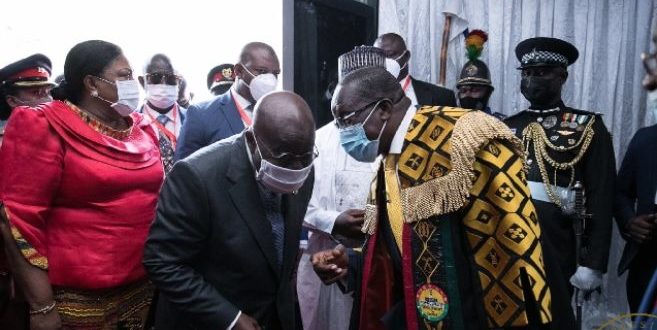 Share
Speaker of Parliament Alban Bagbin has described President Nana Addo Dankwa Akufo-Addo’s comment on the recent Supreme Court ruling that Deputy Speakers of Parliament can vote while presiding over the House as “myopic and unfortunate”.

Nana Akufo-Addo had said the decision of the Supreme Court on the voting rights of Deputy Speakers cannot amount to judicial inference in the work of Parliament.

He continued, “There is nobody in the Ghanaian State that is above the fundamental law of the land. It will lead to the very matter that we have striven so long to avoid – the concentration of unregulated power in our state; we don’t want that and we brought about this Constitution to allow that to not reoccur.”

The above statement is what has triggered Mr Bagbin to respond, as he said he had resisted the temptation to make a comment on the judgment of the Supreme Court until the President commented on the matter.

The Speaker, in a statement, noted that the Supreme Court decision, is, to say the least, not only an “absurdity but a reckless incursion into the remit of parliament.”

He noted that “the trend of unanimity is equally troubling,” adding: “It doesn’t help explore and expand our legal jurisprudence.”

Narrowing in on the president’s comment, Mr Bagbin stressed that it was “myopic”, adding: “Unfortunately, it only goes to worsen the schism between the Executive and Parliament.”

He said the impartiality of the Speaker, Deputy Speaker or Presiding Officer has been treasured and fought for by the country throughout its democratic development.

Mr Bagbin urged the plaintiff to seek a review

Previous ECG to increase electricity tariffs, what you must know
Next BREAKING: SHS student stabbed to death at Anyinam Obuasi