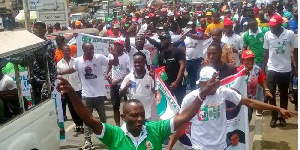 A video has emerged of some Islamic societies singing and dancing as they declare support for Peter Obi and Yusuf Datti ahead of the 2023 general election.

A social media user who shared the video said, the Islamic society in Plateau state held a rally in Jos to campaign for the Labour Party presidential candidate, Peter Obi.

The residents were seen jumping for joy as they chant his name, Peter Obi.

A singer was spotted on the stage performing a song for Peter Obi as his dancers waved the Labour Party and the Nigerian flags.

Although the flagbearer and his running mate were not present at the rally, the crowd in excitement danced and sang along.

Nigerians upon sighting this video took to social media to appreciate the organisers of the rally and expressed their hope that Peter Obi will emerge victorious at the 2023 election.

mrpeterobigregory: The ISLAMIC SOCIETY , Plateau State held a rally in Jos where they released a sweet campaign song for Peter Obi! Peter Obi was not invited there … neither was he told about this and it is FREE ooooh … This is an organic movement … surely in 2023 is ObiDatti

emmanuelsantososinachi: Sir, Nigerians are with you, we love you

josephuzomah: Great Love from our brothers and sisters from Jos ,,may God richly bless you all for standing with the true and honest candidate of labour party ,, together we shall win insha Allah

Previous ATO ESSIEN: WHEN JAIL IS NOT ENOUGH
Next Eritrean soldiers killed my uncle – WHO chief