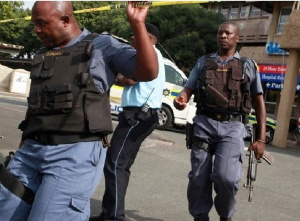 ‘Is Muhammad bigger than the president?’ – SA cops ask Muslims in a lockdown raid

Bheki Cele, South Africa’s Minister of Police, has issued an apology to the country’s Muslim community after it was revealed that cops charged on a small congregation of praying Muslims during the country’s lockdown as a result of the coronavirus pandemic.

The reported 20 or so Muslims were observing prayers during the holy month of Ramadan in a mosque when officers showed up, disrupted the prayers, and ordered them to the ground.

The incident, which happened in the eastern province of Mpumalanga, was caught on video and shared with the public via social media on Saturday. The Ministry of Police confirmed the authenticity of the video.

Cele, on Sunday, called what happened a “sacrilege” and apologized for the officer’s “blasphemous remarks”.

The minister added that “urgent investigations” were underway to ascertain who made the remarks.

South Africa has been under lockdown since March 27 to help slow the spread of COVID-19. From May 1, the country will ease some of the restrictions although the resumption of congregational prayers is going to be possible much later.

Last Thursday, President Cyril Ramaphosa implored that “all South Africans [need] to wear a face mask whenever you leave home” even after restrictions have been lifted.

Ramaphosa also said easing of the lockdown has become necessary because “our people need to eat and they need to earn a living.”

But the president also placed the need for vigilance and care on the doorsteps of the South African public.

“Ultimately, it is our own actions, as individuals, that will determine how quickly the virus spreads,” Ramaphosa said.

The country leads Africa’s count with more than 4,500 confirmed cases of the coronavirus with close to 90 deaths. Some 1,473 have recovered since the first cases were reported in mid-March.

Previous Woman accuses hospital of stealing her baby in Lagos
Next EC meeting: Sam George must be arrested – Kofi Akpaloo