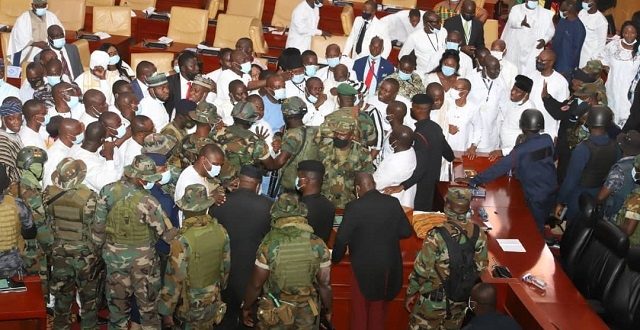 Inviting Military to the floor of Parliament childish – Gyampo

Political Scientist, Prof Ransford Gyampo has indicated that it was childish to have invited the Military into Parliament.

The Military were invited to Parliament to protect ballot paper and boxes after violence erupted in the lawmaking house.

The move has been widely condemned by sections of Ghanaians who believe that the Military has no role to perform in the lawmaking house.

Reacting to this, Political Science Lecturer at the University of Ghana Political Science department, Prof. Ransford Gyampo said it was childish on the part of the individual who invited the Military on the floor of the chamber.

To him, the Marshals of Parliament could have handled the situation and therefore there was no need for the Military to be called in.

“So who ordered the military to go do nothing in Parliament? It was democratically childish and indiscretion on the part of whoever gave the order, regardless of the weakness of the clerk in ensuring order. The marshals within could have managed the situation. We must be ashamed of how we quickly want to use, abuse and deploy the military into purely civilian matters,” he said in a post on social media sighted by MyNewsGh.com.