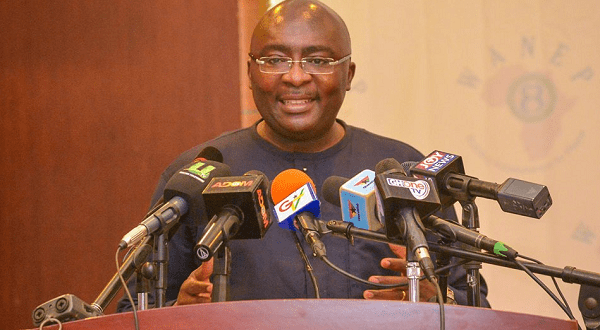 Vice President Dr Mahamudu Bawumia has attributed the recent depreciation of the Ghana cedi to directives from the International Monetary Fund (IMF) to the Bank of Ghana (BoG).

According to him, at the end of January 2019 as part of the seven prior actions to get to the IMF board and the completion of the IMF programme, the Bretton Woods Institution gave Ghana seven actions to complete before March 15.

He said it was as a result of that the Ghana cedi hit an all-time low recording a rate of GH¢5.86 to $1.

However, the cedi has since recorded some marginal appreciation closing at around GH¢5.56 against the dollar as of March 15, 2019.

Speaking at a maiden Town Hall Meeting organised by the Economic Management Team in Accra on Wednesday, Dr Bawumia said: “The most important and the proximate cause of the recent depreciation is the time inconsistency of an IMF prior action on the reserves target.”

“One of the conditions that the Bank of Ghana had to meet was to increase its net international reserves to the level of December 2018. To increase the net international reserves, however, meant that the Bank of Ghana could not sell any foreign exchange in the market. They had to essentially hold their hands to the back and could not intervene on the market during this particular period.”

“So demands for foreign currency was not met by supply as normally happens on a day-to-day basis, and we know when the demand is greater than the supply or the supply is not coming, the price will go up and this is exactly what was happening,” he said.

Denying claims that the Bank of Ghana used about $800 million to shore up the economy to save the cedi, Dr Bawumia said “the market corrected itself. Investor sentiments acknowledged that the fundamentals are much stronger than expected.”

“That would not make sense,” he added.