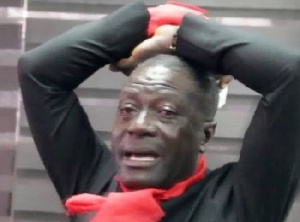 I’m not scared to die, you can’t cower me – Captain Smart

Captain Smart, has said he is unfazed by his arrest and detention.

He said he will not stop shedding lights on the ills in the society for them to be corrected.

“Nobody can stop me, not even my mother or death,” he said on the New Day show on TV3 Friday February 4 while narrating his ordeal in police custody.

The Onua TV/FM morning show host was released on bail on Thursday February 3 after he met all the bail conditions at the Accra Circuit Court 8 to secure his release from police custody.

Captain and another staff of Onua Tv, Eric Daniels Dadzie Copperfield (DJ GH Boy) were detained at the National Security office. This followed a hearing at the Circuit Court in Accra today Wednesday, February 2, 2022.

The court granted them bail after they had pleaded not guilty to two respective counts of charges of extortion and abetment to extortion.

After the court granted them bail around 10:45am the investigator who handled the matter took the four sureties to verify their places of abode.

The two gentlemen were first taken to the National Security office and they stayed there for three hours in the name of briefing the coordinator of what had transpired at the Court.

After three hours at the National Security, one officer (Eric Osei) went with the four sureties to verify their places of abode. This process delayed until the court closed, hence they were not able to process all the conditions for bail.

The court closed at 4 pm by which time the officers who had gone for verification had not returned and so the officers took the two suspects to National Security and then to the Ministries Police Station where they were kept for an hour.

Previous Video: Captain Smart captured having fun with police officers in cells
Next Headmaster on tape having s3x with his 16-year old pupi