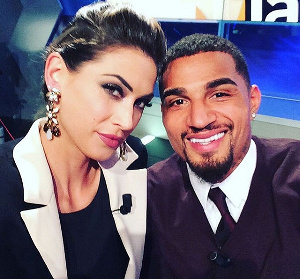 Kevin-Prince Boateng’s stunning wife admitted that she regrets opening up about their sex life after claiming it was the reason why the ex-Tottenham player was always injured.

Melissa Satta-Boateng, 34, stunned fans in 2012 when she insisted that her husband was sidelined due to them having “sex seven to ten times a week.”

The Italian TV presenter said at the time: “The reason Kevin is injured so often is because we have sex seven to ten times a week.

“I hate foreplay, I want to go straight for it. I prefer to be on top so that I can be in control.”

Melissa has broken her silence over the claims she made eight years ago and admitted that she was surprised by the “whirlwind I ended up in.”

The Italian beauty told Gazzetta dello Sport: “You can’t believe what a whirlwind I ended up in.

“You have to be very careful about what you say in football, especially when it comes to sex.

“Just because we have sex so often doesn’t make me a nymphomaniac.”

Melissa and Kevin-Prince started their romantic relationship in 2011 and have had one son, six-year-old Maddox Prince, together.

But the 33-year-old midfielder only managed 24 appearances for Spurs before he was shipped out on loan to Borussia Dortmund.

Boateng has since played for the likes of Portsmouth, AC Milan, Schalke and Eintracht Frankfurt.

The Ghana international stunned many fans when Barcelona made a shock loan move for him in January 2019.

But the Spanish club didn’t make the deal permanent for Boateng, who is currently on loan at Turkish side Besiktas, last summer.

Previous Coronavirus in South Africa: Smokers fume at cigarette ban
Next Passengers can check in or out luggages at Kumasi Airport by 2021 – Gabby reveals