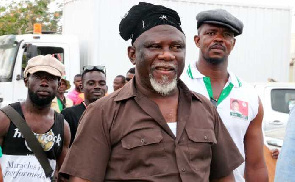 I’m more trained than a policeman; my boys and I will defend ourselves in 2020 – Azorka Warns

Founder of the Azorka Boys, one of the oldest vigilante group in Ghana, Chief Sofo Awudu Azorka has revealed that he is more trained than any policeman the country can boast of, MyNewsGh.com reports.

Azorka who has served notice they will not sit aloof and allow Pro-New Patriotic Party (NPP) vigilante groups recruited into the National Security to take the country to ransom, also vowed to face them boot-for-boot in 2020.

According to him, members of the National Democratic Congress (NDC) are ready to defend themselves since the police provide members of the invisible forces with protection to terrorize innocent Ghanaians while they look on unconcerned.

He indicated that he has personally lost confidence in the Ghana Police Service the reason members of the party will take their destiny into their own hands by making available their own system of protection but fell short to mention in what form it would be done.

“We will defend ourselves and you the journalists. When the time comes you will see how we can defend ourselves. We will fly in 2020. We are coming back to save Ghanaians…I am not a policeman but I am more than a trained policeman. We are protecting you and Ghanaians. We will not give guns to criminals to kill innocent people”, he assured.

According to the Deputy National Vice Chairperson of the NDC, it is his desire to provide protection for both party members and journalists in the country from any harm in the build-up to the 2020 general elections and thereafter.

“NDC is coming to defend journalists. Look at how they are killing you. We are giving the assurance that if we come back to power we will defend all Ghanaians. I don’t support the disbandment of vigilante groups. Police are protecting weapon-wielding vigilante group members who are shooting and injuring the innocent people”, he stressed.

Asked if he has no confidence in the police, he responded in the affirmative kicking against moves to disband vigilante groups in the country.

Previous You’re not different from the BBC journalist; Ask me intelligent questions – Ken Agyapong to Adakabre
Next VIDEO: Kofi Supremo body leaves India expecting to touch down 2PM in Ghana