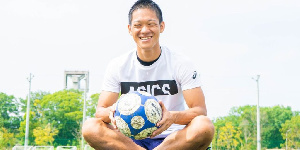 There has never been one route to greatness. Jindo Morishita’s path towards earning a first-ever call-up to Japan’s national team is not only fascinating but also pretty unusual.

Last month, the striker made history by becoming the first Japanese professional footballer to join a Ghanaian club after penning a short-term deal with Premier League side Ebusua Dwarfs.

For the 25-year-old, who previously played in Zambia, the move was a big step which draws him a step closer to realising a long-held dream.

“I have mentioned winning the Champions League in Africa [among my ambitions] and as a player, my ultimate dream is to play in the club World Cup in Japan as a representative of Africa,” Morishita told Goal.

“Besides that, I think any player who is playing football at a professional level, their ambition is to represent their country and obviously, I’ve never stopped dreaming playing for my own country [Japan].

“I think becoming one of the fewest Japanese players in Africa will [bring me] an advantage of being spotted [by Japan], so yeah, let’s just hope.

“To be selected as for the Japanese national team, you have to give the best and give good results in the league and team you’re playing, so we’ll see. That’s up to the Japanese Football Association, it’s not for me to decide. But my dream always is to be there.”

But considering Japan’s available array of talent in the top European leagues, and even those playing at home in the J1 League, one will easily wonder how realistic Morishita’s national team target is.

“Concerning my own level and the current Japanese national team level, within the next one or two years, it’s not realistic [to get a call-up],” the 25-year-old continued.

“But putting myself in such challenging environment in Ghana, I haven’t played in the Premier League in Ghana yet so I cannot say the level [or] the possibilities too far away. You never know what’s going to happen in three years or five years.

Like almost every footballer, Morishita also has an eye on appearing at the Fifa World Cup. For many foreigners in Africa, an easier, and perhaps more realistic, route to the global showpiece, is to adopt a new nationality over time and represent the African nation where they are based.

“I didn’t have that idea in mind but thank you for the idea. I like that. I don’t know how many years I need to stay here in order to acquire a permanent residence to get a Ghanaian nationality,” said the forward on the subject.

“But if I am really eager to play in the World Cup and if the Ghanaian people will accept me to play for Ghana, that might be one of the options. That’s an interesting option for me. I need to do some research about that in order to acquire Ghanaian nationality.

“The interesting thing is I don’t feel much of an identity in myself as a Japanese. I was born in Japan, but I was raised outside of Japan, and there is this sort of identity crisis in me. I was bothered when I came back to Japan from the Netherlands because I didn’t behave like a Japanese.

“Japanese are very calm, shy, they respect, but I was quite aggressive to talk about what I thought, my opinion, and people didn’t enjoy that at some point, when I was 15 years old. And that made me think: ‘Am I really a Japanese?’

As the Ghana Premier League resumes for the second round on Easter weekend, Morishita will have to wait a little longer to get going in the championship due to a delay in the processing his paperwork.