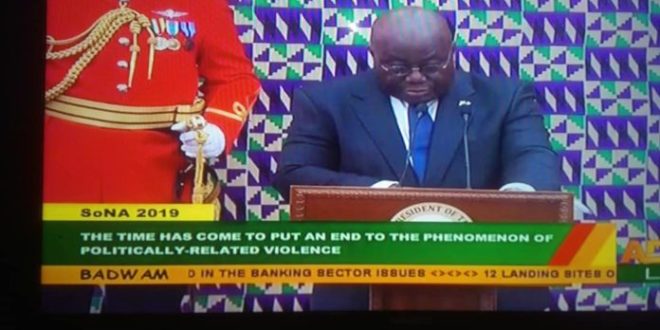 President Akufo Addo has indicated his readiness to sign the much-awaited Right to Information Bill into law soon after it is passed by Parliament.

“Mr Speaker, I’m happy to state that as you know, Parliament has virtually completed its deliberation on the Right to Information Bill and any moment from now the nation will hear the news of its long-anticipated passing. I will happily assent to it as soon as it’s brought to my table,” President Akufo Addo said while delivering his third State of the Nation Address in Parliament on Thursday, February 21, 2019.

The Right to Information Bill, when passed, will take effect only in the 2020 financial year.

This follows an amendment proposed by the majority leader and Minister for Parliamentary Affairs Osei Kyei Mensah Bonsu on Wednesday.

Financial provision for the implementation of an RTI law had not been made in the 2019 budget.

That, according to Mensah Bonsu, makes the implementation of the RTI bill when passed into law improbable.

“So I guess what we could do is to say that the act shall come into effect in the 2020 financial year,” he stated on the floor of Parliament.

“So we’ll urge government then that if there will be any supplementary estimates some allocations should be made to start this in earnest so that into the next financial year which is 2020, we shall have a full-scale implementation of the right to information bill,” he added.

Mensah Bonsu’s position was unanimously accepted by the House.

According to Prof. Ocquaye, Parliament has completed 80% of work on the bill and will pass it by February 2019.

The RTI bill was laid before Parliament by the Deputy Attorney General Joseph Kpemka Dindiok in March this year.