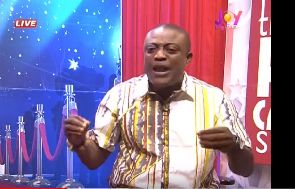 Controversial lawyer Maurice Ampaw has vowed not to surrender a Menzgold vehicle in his possession to the Economic and Organised Crime Office (EOCO).

The private legal practitioner is currently in possession of a Toyota Land Cruiser Prado belonging to embattled gold dealership firm.

This is despite EOCO securing a court order to freeze all assets, accounts and other related businesses belonging to Menzgold CEO, Nana Appiah Mensah.

Speaking to Accra-based Neat FM, Mr. Ampaw admitted having the said car is in his possession but said he acquired it through legal means.

He explained that he invested GHc4 million at Menzgold and would only surrender the car to EOCO if the gold dealership firm refunds his money.

“Yes I have the car belonging to Menzgold, but the question is, how did I get that car?”

“When Menzgold issues was starting, I officially wrote to them that I need my investment or I drag them to court, they replied to me explaining that they have challenges mobilizing money so we came to an agreement that I will own and use their Toyota Land Cruiser Prado as a lien until they pay back my money,” he said.

“I don’t even use that car; I have so many cars I am using. If EOCO wants to know, I am not Shatta Wale who was given the car for free, I am an investor. I will not give the car to them today or forever until I get my money back.”

“EOCO should stop this propaganda; I am the master in that game. They should rather learn the law and know what lien is,” Mr. Ampaw added.

Meanwhile, Menzgold CEO Nana Appiah Mensah is currently a wanted man after an Accra Circuit Court issued a warrant for his arrest.

The arrest warrant follows the failure of Menzgold to refund the investments of aggrieved customers who have their monies locked up with the gold dealership firm.