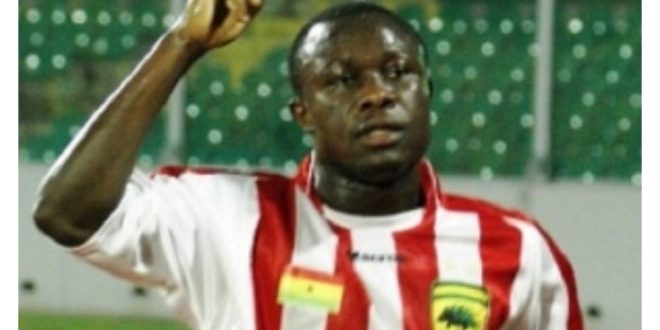 Poku enjoyed good spells with Asante Kotoko and King Faisal in the early 2000s, which he believes he was better than Asamoah Gyan, who within that period, played for Liberty Professionals in the Ghana Premier League(GPL).

In an interview with YouTuber, Zion Felix, he was asked whether he had said previously that he is the best striker Ghana has ever had, which he denied.

“I didn’t say that. What I said was during my time,” he denied.

Kwadwo Poku then explained that, in his peak years, there were three top strikers in the GPL including Gyan, he was the best among the three.

“You know every player has his time(peak years), Abedi Pele had his time, Tony Yeboah had his time. But during my time, the strikers were me, Asamoah Gyan, and one other player who played for Ashanti Gold, Shaibu (Yakubu). So I said I was the best amongst us in the Ghana Premier League,” he said

He added that Gyan will vouch for him.

“If you interview him(Asamoah Gyan) he will tell you that, it’s the truth.”

The former FC Midtjylland striker was a member of the Blak Stars squad that secured Ghana’s first-ever qualification to the World Cup in 2006. However, he missed the squad for the World Cup finals in Germany.

Currently, he is based in Denmark following his retirement in 2015.