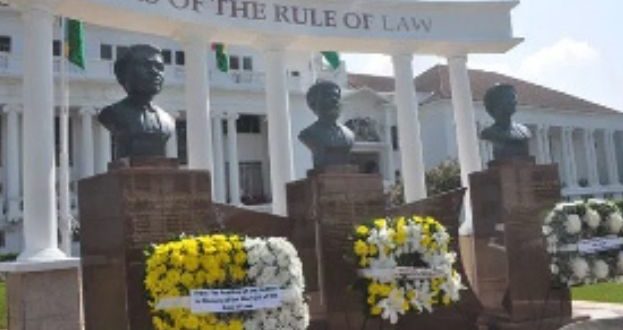 JJ Rawligs was the head of state

Kwabena Agyei Agyepong, son of one of the three High Court judges who were murdered during the erstwhile Provisional National Defence Council, PNDC, administration; has indicated that he wanted to trace and arrest one of the soldiers officially blamed for the deaths, but who ‘miraculously’ escaped, Lance Corporal Samuel Amedeka.

Speaking on Starr Chat on Wednesday, March 23, the former General Secretary of the governing New Patriotic Party, NPP, said, he had about seven press conferences in 1999 which was aimed at arresting Amedeka who at the time was hiding in Togo.

Agyepong indicated that he had “mixed reactions” when he heard of the death of Jerry John Rawlings – the man under whose administration his dad was killed.

He said the first thing he thought about was the wife and children of Rawlings. He believed that it is difficult for anybody to lose a father and husband like the way the Rawlings’ lost him.

“I felt we never got to know [who killed the three High Court judges], maybe Amedeka – one of the soldiers who managed to escape miraculously – will appear one day…I had a campaign of about seven press conferences in 1999 and Amedeka was hanging around Lomé but I don’t know where he is now.

“In those days, I was determined to even locate him, I mean trace him to Nigeria and other places [and arrest him]. I have had closure already; I have decided that look, life must go on. My father doesn’t want us to continue to live with that,” Agyepong stated.

Agyapong during the interview, stressed that Rawlings and his National Security Head, Kojo Tsikata, died with the truth regarding who the perpetrators of the crime were.

“I think both he [Rawlings] and Kojo Tsikata died with the truth. Between the two of them, they knew who did it [killed my dad].

“I don’t think Amartey Kwei or any of the soldiers, 23-year-old Amedeka and others, had any connection to my dad and his colleagues,” he explained.

“There is no way they will just walk to the house, pick them and they will go and execute them in such a savage manner without any instruction. But it is okay, I believe in God eternally. I believe that in life, you have to have the spirit of forgiveness,” Agyepong added.

The incident shook the foundation of the country and the judiciary in particular on June 30, 1982, as they were abducted, shot, and burnt by some soldiers.

They were accused of being corrupt and biased; having adjudicated on high profile cases involving the then military governments (AFRC and PNDC) all of which had Mr. Rawlings as the head of state.

An investigation conducted into the murders by a Special Investigative Bureau (SIB) found Amartei Quaye and others responsible.

Quaye and a few soldiers including Amedeka were to be shot by a firing squad but Amedeka broke jail and has since remained a fugitive.