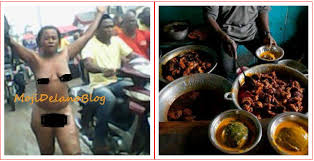 An owner of a popular ‘buka’ (local street restaurant)  confessed to using diabolical means to entice customers, as well as take their destinies.

According to eye witnesses, the lady named Happiness a native of Akwa Ibom state, suddenly ran mad while at her buka located at Aleto in Eleme Local Government area of Port-Harcourt, Rivers state. She was said to have suddenly started acting crazy, tore herclothes and started confessing how she employed diabolical means for the growth of her business. In her confession, she said she mixes water used to bathe corpses with her food, as well as water from her private part and menstruation blood.

Continue to read after the cut…

She said she did all these to attract customers whose “destinies” she used for the growth of her business and riches. After her confession, she tore off her clothes and went around town naked, confessing her evil, appearing to have lost her sanity.
The news of her confession spread around the area, and some of her customers who are mostly the commercial ‘okada’ riders and angry onlookers ponced on her beating her till the Police who arrived in time and took her away.
Once as a kid, I once witnessed this when a togo lady who sells beans confessed to using water to wash her private part and use the mixture to make her beans. Then we never knew the reason why the whole neighborhood trooped to eat from her shop. The lady died after her confession so stuff like this are real as I have witnessed one.
This should serve as a lesson. know where and what you buy and eat. If you can’t afford a decent meal out there, why not make your own meal or buy fast food if it’s that urgent. Then only God could keep us safe. Do not ignore this, read and share as you might be helping someone.
Chop bar seller 2019-11-20
Elvis Anokye
Share

Previous Chop bar seller confesses “I use water from my private part and mortuary to cook”
Next Sad Video: 9-year-old boy recounts how his teacher repeatedly raped him during school hours.