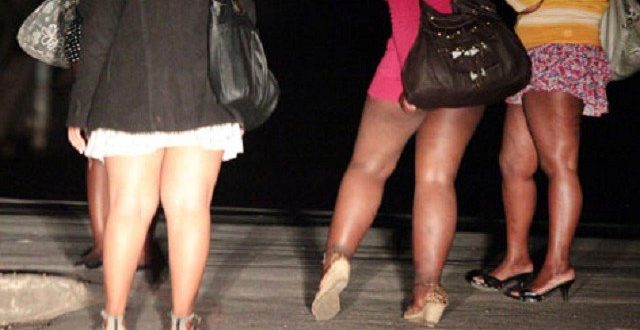 I use magic cream to attract men – Sex worker reveals

Not all that glitters is gold, so if you get your orgasm from commercial sex workers, you may want to rethink your source of orgasm. Simply looking into the eyes of a sex worker will draw you in and leave your pockets dry.

A sex worker dedicated the best part of her interview with Joy News to addressing how the current economic situation in Ghana is impacting their operations.

She also revealed how some sex workers, including her, resort to enchantment to attract clients and sometimes innocent guys who just happen to find themselves in the wrong place at the wrong time just by walking past a commercial sex market.

Sitting in the corner of her bed in a skimpy blue dress and donning neatly trimmed blonde hair with her legs stretched, the 22-year-old, who only gave her name as Becky, opened up and shared what could easily pass as top secret of arguably the oldest profession.

Responding to my question ‘how do you keep yourself tight?’, Becky said, “I have a place that I can go, they’ll give me some little things I’ll do, I can rub my powder, rub my honey, my cream, my oil, to make a guy even if you are passing, only your looking to me can make you stop and after everything, any amount of money I ask you to give me, you will give it to me,” Becky said.

That response struck me. So I asked Becky if the items she rubs on her body, including oil, honey, and powder, were charms? Her response after elegantly making one snapping noise with a gum was an emphatic Yes.

“Yeah, after the woman made me start that, so I was so annoyed because I didn’t want to do it, so she was the one that pushed me to do it. Understand?

At this point, the almost teary hooker who sat less than a yard from me on her bed paused momentarily and briefly buried her head in her left palm. She subsequently mustered courage and went on to put a fraction of the blame on her friend who she says pressurised her to get into the realm of using charm for the illegal profession.

“It was my friend that brought the idea to do that (use charms), so I have to do it.” She may have spilled the beans, but it may turn out to be valuable information for self-restrained men who otherwise would fall victim to the charms used by people like Becky who openly undertake their illegal operation on Ghana’s streets.

However, the illegal trade has not gone on without occasional swoops by the Ghana Police Service personnel.

“The police something (occasional arrest of commercial sex workers) the thing dey bother me,” Becky lamented in pidgin, almost suggesting that she and her other colleagues are engaged in a lawful venture.

Many glamorous ladies line and pose on Accra’s red light corners, ready to offer sex for money. But behind the glamour, may also be the element of enchantment that turns heads, even the ones that are reluctant to turn.

To not fall prey to the voodoo laced glamour, you may want to keep your head down the next time you walk past a commercial sex market.

Players in the industry are also digitalising as some of them gradually begin to transition their operations from the streets to social media platforms.