Home / ENTERTAINMENT NEWS / SHOWBIZ KONKONSAH / I sleep with women because of lust, not God’s directive – Obinim 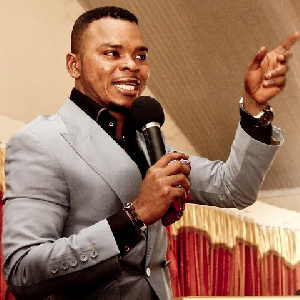 I sleep with women because of lust, not God’s directive – Obinim

Controversial Ghanaian preacher, Bishop Obinim has confessed to falling for lust on multiple occasions despite his steadfastness and faith in God and Christianity.

This revelation comes following an allegation his former junior pastor made on live TV regarding how he cajoled him into raping his sister as God’s directive.

The junior pastor known as Wisdom appeared on Kennedy Agyapong owned TV station, Net2 TV, where he made some wild allegations against the founder of The International God’s Way Church.

But in his response, Obinim has said God has never directed him to have a sexual encounter with women neither has he [Obinim] directed anyone to have sex as God’s directive.

“God has never directed me to have sex with women as part of a spiritual directive,” he said on his show. “If I lay any woman, it’s because of lust.”

He, however, stated that if someone says he or she was directed by God to sleep with women as a spiritual directive, he won’t argue.

Obinim said he will expel any church member or his junior pastors if they sleep with someone’s girlfriend or wife. For him, this is something he can’t tolerate.