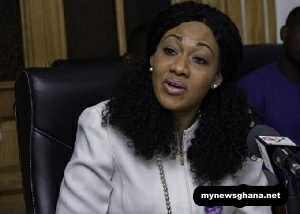 I love my country – Jean Mensa speaks about traveling rumors

Jean Adukwei Mensa, the Chairperson of the Electoral Commission has in a move to dispel the notion that she has travelled abroad, professed her love for the country.

According to Jean Mensa, she loves the country so much that she would not leave at this crucial time.

The Electoral Commission was on Friday, December 11 forced to issue a press release to confirm the presence of Jean Mensa in the country after viral reports suggested that the EC chair flew out of the country after announcing the results of the 2020 Presidential elections.

The reports stated that to escape attacks from disgruntled Ghanaians, the EC and her deputies had temporarily relocated to the United States.

The EC, in its press release, intimated that neither Jean Mensa nor her deputies has travelled abroad.

It said that they were still in the country and executing their duties as the constitution and job demands.

“We wish to state that Mrs. Jean Mensa, the Chairperson of the Electoral Commission, as well as all the Commissioners are at post discharging their legally mandated duties…,” the statement read in part.