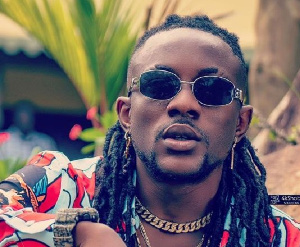 Addi Self, a defunct member of the Shatta Movement Militants, has disclosed on Rainbow Entertainment, on Rainbow Radio 87.5Fm that he became depressed when he fell out with Shatta Wale.

He told host DJ Slash that one of his depressing moments in his life was when Shatta Wale came out to peddle lies and falsehood about him after they went their separate ways.

Addi Self who is originally known as Jafaro Mohammed said he looked up to Shatta Wale as a Mentor, but, he felt pained after Shatta Wale came out to say negative things about him.

”That is one of my hardest challenges. It affected me badly. I was depressed for a while, but I had strong people around me, prayed a lot, and as a spirited guy, I came out of the depression and came out stronger.”

He said it was a great initiative for him to push his music when he was around Shatta Wale because he had so much love for him.

When asked if he has a good relationship with Wale, he said:”I am cool with him, but I don’t know of him”.

According to him, he studied a lot from the camp of Shatta Wale and is happy he got to meet him.

He added he did not lose anything leaving Shatta Wale.

Addi Self said Ghanaians are loving his vibe and the media is also supporting him to grow.

As someone who has struggled from the slums and hawked on the streets, he wants to use his music to tell the struggles he went through.

Meanwhile, he has vowed never to return to the Shatta Movement again.

In explaining what caused their separation, Addi Self said, ”what happened was beyond music but I am unwilling to disclose what that was”.