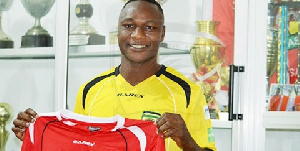 I have built a house with my Kotoko salaries – Wahab Adams

Ghanaian clubs have been accused of mostly ripping players of with the meager salaries they pay to players.

But it appears with Asante Kotoko the situation is different as players at the club are able to earn enough to even put up properties without traveling.

Wahab Adams joined Asante Kotoko from Aduana Stars in 2017 after the expiration of his contract with the Ogya boys.

Since joining Asante Kotoko, the central defender says his life has never been the same as it has changed for the better.

According to the defender he has been able to build a house three years after joining Kotoko whiles establishing businesses too.

Appreciating what his move to Asante Kotoko has offered him, Adams said “For the past 3 years of coming to this family, I have been able to build a house which is yet to be furnished and also have established businesses which derives me more income,’’ he told Light FM.

He has sounded a note of caution to his fellow teammates not to joke with the club and play their hearts out.

This fabulous club has really helped me a lot so no player should underestimate the team” he added.