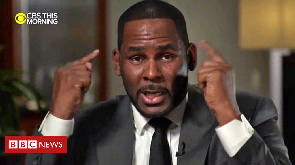 I have been assassinated – R. Kelly

R. Kelly is blaming scorned women and social media for his latest troubles.

In his first TV interview since he was charged with sexual abuse last month, the singer ranted and cried, saying he is being persecuted.

“You can start a rumor on a guy like me or a celebrity, just like that,” Kelly told CBS News’ Gayle King. “All you have to do is push a button on your phone and say, ‘So and so did this to me, R. Kelly did this to me,’ and if you get any traction from that, if you’re able to write a book from that, if you’re able to get a reality show, then any girl that I had a relationship (with) in the past that it just didn’t work out can come and say the same thing.”

He added, “I’m talking about the power of social media.”

King sat down with Kelly in his Chicago apartment for a nearly 80-minute interview, a portion of which aired Wednesday on “CBS This Morning.”

“I’m very tired of all of the lies,” Kelly said. “I’ve been hearing things and seeing things on all of the blogs and I’m just tired.”

Kelly said those lies include that he’s holding women against their will and that he has a “cult.”

“I don’t even really know what a cult is, but I know I don’t have one,” the singer said.

The indictment accuses Kelly of sexual acts with three children older than 13 but younger than 17. There is no age range listed for one of the alleged victims. The charges say Kelly used force or the threat of force.

Kelly has denied the charges, and his attorney, Steve Greenberg, has said his client is innocent.

“I think all the women are lying,” Greenberg said after Kelly turned himself in to police.

Attorneys for two families who say Kelly is controlling their daughters, Joycelyn Savage, 23, and Azriel Clary, 21, spoke out after the CBS interview to deny that their complaints were based on money.

The attorneys said the families have never asked for or received any money from Kelly. The parents of the two women denied they sold their daughters to him.

In the CBS interview, Kelly said Savage and Clary are his girlfriends.

“What kind of father, what kind of mother would sell their daughter to a man?” he asked. “How come it was OK for them to see me until they weren’t getting no money from me?”

King also interviewed Clary, and a portion of the interview aired Wednesday morning. In the clip, Clary is crying and Savage is comforting her.

“I’m crying because you guys don’t know the truth. You guys are believing this f—king façade that our parents are saying. This is all f—king lies for money and if you can’t see that, you are ignorant and you’re stupid,” she says.

Later Wednesday, the Savage family spoke to their daughter by phone, with the conversation recorded on video and released on Facebook. The family says they had not spoken to her in two years and she is being held against her will.

After her mother says hello, Joycelyn replies, “I just wanna let you know, like right now I need you to listen, like really listen to me, I have told you guys a million million times that I am OK where I am and I am happy.”

Reacting to Kelly’s interview, another woman, Jerhonda Johnson Pace, tweeted that when she watched it she “saw a man that needs help.” She has alleged she had a sexual relationship with the singer when she was 16.

“I don’t believe that prison will help or ‘fix’ Robert’s actual problems… In his heart, mind, body and soul he believes he’s done no wrong. I think asylum is what he needs: 24/7 care and attention,” she wrote.

“The allegations against Mr. Kelly are false, and are being made by individuals known to be dishonest. It is clear these continuing stories are the result of the effort of those with personal agendas who are working in concert to interfere with and damage his career,” the statement said. “Mr. Kelly again denies any and all wrongdoing and is taking appropriate legal action to protect himself from ongoing defamation.”

The latest charges against the singer span from 1998 to 2010, according to Cook County, Illinois, State’s Attorney Kim Foxx.

Kelly told King he has done quite a few things wrong in relationships but said he has apologized to women for those.

He also reflected on the Lifetime docuseries “Surviving R. Kelly” in which multiple women shared their allegations of sexual abuse at the hands of the singer.

“They were describing Lucifer,” Kelly said. “I’m not Lucifer. I’m a man, I make mistakes. I’ve made mistakes. But I’m not a devil and by no means am I a monster.”

Kelly told King he loved both of the young women and was in a relationship with them.

He also denied being sexually involved with Clary when she was underage, as has been alleged.

Asked if he is an older man who likes young women, Kelly said, “I’m an older man who loves all women,” and said he looks only for women who are “legal.”
The singer denied he has had sex with anyone younger than 17 and said women have lied about him.

At one point during the interview, he became emotional, saying, “I didn’t do this stuff! I’m fighting for my life! Y’all killing me with this s**t!”

“This is not about music,” Kelly cried out after leaping up from his seat. “I’m trying to have a relationship with my kids and I can’t do it. Y’all just don’t want to believe the truth!”

Kelly insisted he has done nothing wrong and said some of the women’s parents have told him they would destroy his career.

He said he had no reason to hold women against their will.
Kelly insisted he needed help.

“I need somebody to help me not have a big heart,” he said. “Because my heart is so big, people betray me and I keep forgiving them.