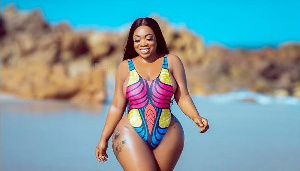 Ghanaian actress and socialite, Moesha Boudong has identified that when it comes to social media trolls and criticisms, she has no contender.

Moesha has come under severe scrutiny on social media for a number of reasons in the past. Her infamous statement on CNN about how she and other Ghanaian women are using their bodies for money was the one that got her the biggest backlash from social media users.

Another instance when she was dragged on social media for publicly admitting to acquiring her curvy body through liposuction and a butt-lift.

But in an interview with Joy News, the Ghanaian actress has opened up on the stress and drama that comes with being trolled.

“I’m the most trolled and most talked about celebrity in Ghana. Even though it sometimes gets to me, I try to be strong. It happens that I speak the truth and people hate the truth. The whole of Ghana bullied me, they called me a prostitute when my issue came up. I’ve seen doctors, politicians, and pastors’ wives for instance getting their bodies done. Will you call them prostitutes also? Will you say they are doing it for men?” she asked.

Asked whether she regrets any of her actions in the past, Moesha replied saying:

“I have no regrets at all. We learn from our mistakes as we grow because life in itself is a journey. I’ve passed through a lot of things and it has made me a better woman.”