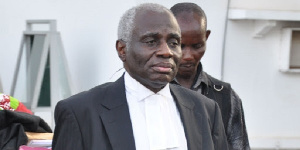 Renowned academic and lawyer, Tsatsu Tsikata is one of the legal brains that has established his legacy in the law profession over the years.

Having begun his law profession at a very young age of 20, he obtained his first-class honours in the LLB Part II examination.

According to a Ghana News Agency (GNA) publication on July 2, 1969, Tsatsu Tsikata was one of 42 other students to have passed the examination and the only one to have obtained first-class honours among his colleagues.

Below is the post which was reshared by Graphiconline.com:

Previous VIDEO: See what pregnancy turned this beautiful lady into
Next Watch this heated 1957 debate between Ghanaian, Nigerian, South African and Ethiopian students