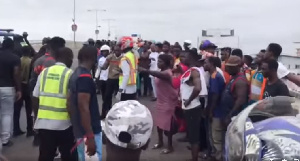 Private legal practitioner, Lawyer David Agyekum has shed light on what the law says about the arrest and handling of mentally unstable persons who commit criminal offences.

This comes on the back of a recent case of murder committed by a mentally unstable woman at the Kwame Nkrumah Circle on August 1.

Audio and video details from an eyewitness indicated that the woman used a big stone to murder the yet-to-be-identified man in his sleep after an earlier altercation between the two.

She has since been taken away by the police who arrived shortly after the incident in a police pickup truck.

Giving some legal education about what the law says about prosecution or legal handling of such persons, Lawyer Agyekum, in an interview with GhanaWeb, explained that the criminal procedure act, specifically, section 133, of the Criminal and Other Offences (Procedure) Act 30, makes provisions for the safety, protection, and well-being of such persons.

In such instances he explained, the state does its medical investigations to ascertain the health conditions of the person, and subsequent actions are taken.

“With regards to the substantive law, persons that are suffering from lunacy, cannot be convicted for a crime and that is because they are deemed not to be able to appreciate the nature and consequences of their actions and so insanity is a defense in law that the defense can raise in order to exonerate the accused person from jail

“When you look at the criminal procedure act, specifically, section 133, of the Criminal and Other Offences (Procedure) Act 30, it provides for how a person who suffers from lunacy or is mentally unstable should be handled by the court and that particular provision provides that in order for the court to determine whether or not the accused person is suffering from lunacy or insanity,” Lawyer Agyekum noted.

Below is the detailed explanation of how the law deals with mentally unstable persons who commit criminal offences:

– The court will have to make an order for the appointment of an expert and so medical experts would have to be appointed by the courts for them to examine the person to determine if indeed the person is mentally unstable or not and that is going to inform the court as to whether or not the person would be able to stand trial.

– Once the report is completed, the medical expert would have to mount the witness box and tender in their report as evidence on oath.

– If the court is satisfied that indeed the person is mentally unstable, the court is going to record that formally.

– The accused person will be declared as a criminal lunatic.

– After that, the accused will be subjected to periodic observation until the medical professionals form an opinion that she will be able to stand trial and so if they later determine that, they would bring her back to court and the trial will proceed.

– Insanity is also a defense and what that means is that, if the court finds out that the person is indeed insane, the court is going to exonerate her from guilt, and that is because she lacks the requisite mental capacity to be able to appreciate the consequences of her actions.

The unnamed eyewitness, explained that the woman who was known for usually pelting stones at moving cars on the stretch got into an exchange with the deceased who tried to stop her from continuing the act by also pelting stones in an attempt to get her away from the scene.

This went on for a while until the deceased left to go and attend to other things, returned to sleep on the pavement and that’s when the mentally unstable woman took the opportunity to revenge.

When contacted, the Ghana Police Service said that it was yet to confirm the incident.

However, details from myjoyonline.com indicate that the police later apprehended the woman after a mob had threatened to lynch her.