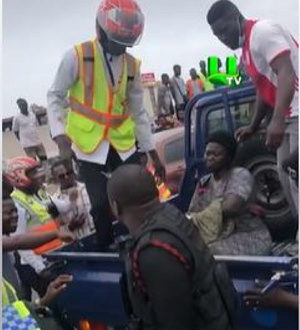 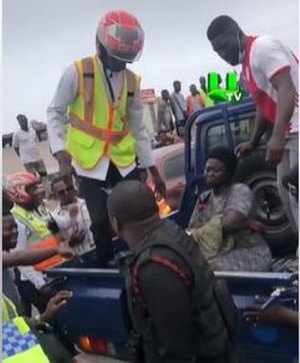 A video of how a mentally unstable woman was whisked away at Kwame Nkrumah Circle in Accra after killing a man has emerged.

On August 1, Ghanaweb reported a story based on eyewitness accounts about how the mentally unstable woman used a big stone to hit an unidentified gentleman said to be an Okada rider leading to his death.

The eyewitness, Ikem (not his real name), explained that the woman had been known for usually pelting stones at moving cars on the stretch.

This went on for a while until the deceased left to go and attend to other things.

“The woman was sitting just across the street and the guy was also seated there, and the guy was throwing stones at her – sacking her to move away from where he was seated. As he did that, the woman kept dodging the stones.

“The woman also gathered some stones to retaliate but instead, she was throwing them at the cars and motorbikes on the road. After some time, the guy went roaming for about two, three hours and came and slept on the pavement. So, when the mad woman saw him, I think she took revenge, ” he told GhanaWeb.

Few moments after the incident the Ghana police later apprehended the woman after a mob had threatened to lynch her.

In the viral video, the woman was seen being whisked away in a police pickup truck while people gathered around her.