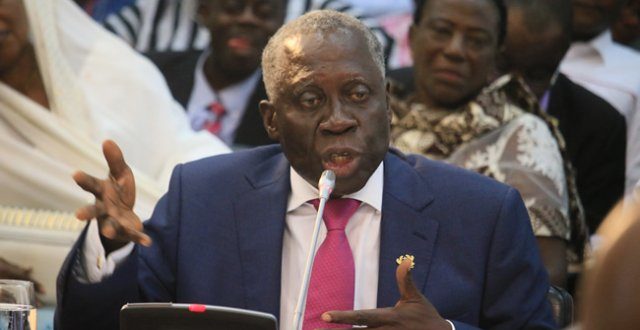 Yaw Osafo-Maafo, the former Senior Minister has been named as one who directed the Criminal Investigations Department (CID) of the Ghana Police Service to take over an Economic and Organised Crime Office (EOCO) investigation into the tenure of Dr Stephen Opuni as the Chief Executive of COCOBOD.

The investigation which was almost concluded by EOCO had to be abandoned for the CID to take over.

Chief Inspector Thomas Prempeh Mercer who appeared in court as the 7th prosecution witness during cross-examination by Samuel Cudjoe, Counsel for Dr Opuni, told the court that EOCO had carried out extensive investigations for about six months with Dr Stephen Opuni co-operating and reporting to them every week.

He indicated that all actors necessary for the investigations, both in and out of the employment of COCOBOD, were equally co-operating.

But on July 7, 2017, the then Senior Minister petitioned the police CID to effectively curtail whatever was being done by an equally competent state agency and start a new investigation.

In a report by Angelonline monitored by GhanaWeb, counsel for the accused was very curious and wanted to know which authority Yaw Osafo-Maafo had in the case when he was also not the Attorney-General at the time.

Chief Inspector Thomas Prempeh Mercer, who is with the Financial Forensics Unit (FFU) of the CID, explained that Osafo-Maafo’s petition to the CID was based on the fact that it was recommended that investigations should be conducted into the activities of the accused when he was at the helm of affairs at COCOBOD.

Samuel Cudjoe, the counsel for Dr Opuni, then asked the witness: “I believe you are aware that the transition ended in January 2017. Isn’t it?”

The witness responded: “My Lord, I cannot be double sure of the exact date that the transition team ended its work. My Lord, and so if there was a finding that action needs to be taken on the 7th July, that we received the petition to investigate this case, was not unusual.”

Dr Stephen Opuni, the former Chief Executive of COCOBOD and Seidu Agongo, a businessman, are facing 27 charges including defrauding by false pretences, wilfully causing financial loss to the State, money laundering, corruption by a public officer and contravention of the Public Procurement Act.

They have both pleaded not guilty to the charges and are on a GH¢300,000 self-recognisance bail each.

Read below excerpts of the cross-examination:

Q: Chief Inspector Prempeh, you informed this court that on the 7th of July, 2017, you received a petition. Who sent the petition?

A: My Lord, the petition was signed by then Senior Minister Hon Yaw Osafo-Maafo.

Q: What was his locus and by which authority did he petition the Police when you had a substantive minister who had oversight on COCOBOD?

A: My Lord, during the transition, investigation of agencies were conducted and one of the sub-committees which did the investigation recommended that investigation should be conducted into the activities of A1 during his tenure as the CEO of Ghana Cocobod. It is on this basis that the Senior Minister signed this petition.

Q: I believe you are aware that the transition ended in January 2017. Isn’t it?

A: My Lord, I cannot be double sure of the exact date that the transition team ended its work. My Lord, and so if there was a finding that action needs to be taken on the 7th July, that we received the petition to investigate this case, was not unusual.

Q: You know as a fact that EOCO was investigating this very matter and that they were well advanced in their investigations before you took over. Isn’t it?

A: My Lord, that will depend on taking over the case. My Lord, after reviewing the docket that is where you know whether it has advanced or not.

Q: So you took over the investigation of this case from EOCO?

A: My Lord, that is very true.

Q: To your knowledge do you know the sector Ministry which COCOBOD reports to?

A: My Lord, now it is under the Ministry of Agric.

Q: Chief Inspector Prempeh, don’t you find it very odd that the Senior Minister who has not got any oversight on COCOBOD will petition that you take over investigations from EOCO?

The question was objected to by the Director of Public Prosecutions, Yvonne Atakora Obuobisa, but it was overruled after the trial judge, Justice Clemence Honyenuga, Justice of the Supreme Court, sitting as an additional High Court judge, listened to Samuel Cudjoe’s take on the objection.

A: My Lord, I don’t see anything wrong with it.

Q: Did you speak to any of the EOCO investigators who conducted the initial investigations before you took over?

A: Yes my Lord. My Lord, the team spoke to Prosper Akrasi of EOCO and Paul Gyan. These are the investigators. My Lord, Prosper Akrasi gave his statement to the Police at the CID headquarters.

Q: What influenced the Police to take over the investigation from another State Agency?

A: My Lord, this is not the first time that the Police CID has taken over an ongoing investigation in a sister state security organisation through the Director-General CID.

Q: Did the petition concern only COCOBOD?

A: My Lord that was so, the petition was given to us through the Director-General of CID concerns only COCOBOD.