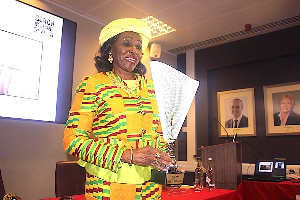 How Konadu Rawlings was hailed during SoNA

The State of the Nation Address (SoNA) as delivered by the president of Ghana, is typically a big occasion but the 2022 edition came with its own different feel when the Speaker of Parliament, Alban Bagbin, used his opening remarks to specially welcome a former First Lady into the House.

Nana Konadu Agyeman Rawlings, like many of the dignitaries present in the Chamber of Parliament, got introduced by the Speaker of Parliament just before President Nana Addo Dankwa Akufo-Addo gave his speech but Alban Bagbin chose to ‘celebrate’ her in a special way than he did all the others.

Describing her as a bold woman, a term coined from her infamous slogan for her political party; the National Democratic Party (NDP), the Speaker hailed her for being a champion of women empowerment globally.

“[cheers of ‘Be Bold!’] Yes, she has been a very bold lady I can confirm that she’s been one of the catalysts that have brought the issue of women empowerment not only in Ghana, but globally,” he said.

This would be the first official State of the Nation Address that the former First Lady, Nana Konadu Agyeman Rawlings, has attended since the passing of her husband, the late former president of Ghana, Flt. Lt. Jerry John Rawlings, in November 2020.

It is also worth noting that her first daughter, Dr. Zanetor Agyeman Rawlings, is also the Member of Parliament for Korle Klottey on the ticket of the National Democratic Congress (NDC) – the party formed by her late father.

President Nana Addo Dankwa Akufo-Addo gave an over-one-hour long address on the state of the nation, where he spoke about a number of issues including the recently passed Electronic Transactions Levy (E-Levy), the qualification of Ghana to the 2022 World Cup, and issues surrounding coup scares in the country.