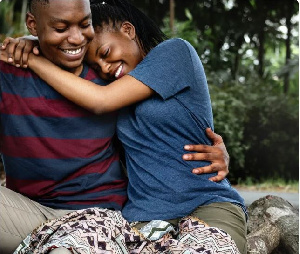 Four years ago, I sat in an airplane from Kumasi to Accra. It was my first time on an airplane and everything about it got me scared. Ten minutes after I sat down, a guy came to sit next to me.

He said, “You’re sitting on my seat.” I said, “Oh sorry, I didn’t notice.” I was about to vacate the seat when he told me, “Don’t worry. I don’t even think the flight would be full. I can change my seat if I want to.” I said, “Thank you.”

Immediately the plane took off, I gripped the hand of the guy. The grip got tighter as the plane went up. He asked, “Your first time?” I said, “Yeah my first time.” He said, “Don’t worry, it’s safe.” I said, “I know it’s safe but I can’t trust my hometown witches.”

He asked, “Why did you wait for so long before taking your first flight? I said, “The person I’m visiting bought this ticket for me. Left to me alone, I would have taken trotro. I feel I belong there than here.”

He laughed. Everything I said sounded funny to him. He said, “I like the way you say things. You’re very outright and I admire that.” We spoke about so many other things and just when we were about to talk about the work we do, we got to Accra. Again, I held his hand as the plane descended. I said, “This is the reason why when I travel abroad, I won’t come back home again. I can’t get used to this.” He was the first to get down. When he got down, he waited for me at the Arrival and that was where we exchanged numbers.

Two paragraphs ago, I said, “The person I’m visiting bought this ticket for me.” Let’s talk about that person.

He’s a guy I met at a friend’s wedding. We sat together in the church and accidentally sat together at the same table at the reception. He said, “You this girl, why are you following me everywhere go?” I said, “You’re the one stalking me, say the truth.” At the reception, we engaged in a very lengthy conversation which ended in contacts being exchanged. We talked often on phone and we chatted often when he got the time. Two weeks later, he proposed to me and I said yes but for so long we couldn’t meet because of his work. He worked with an oil and gas company in Accra and according to him, his work demanded a lot from him that he didn’t have time to do other things.

So one day he called and said, “Why don’t you visit me this weekend?” I said, “I can come but unless I do a return journey because the next day, I have a class to attend.” He said, “You can come with a flight so you get here early. That way, we can spend a lot of time together before you leave.” That was the reason I was on the flight that day. I was traveling to Accra to see my boyfriend for the first time. I was with him when the guy I met on the flight called. I couldn’t pick. I was kissing him in his room when the guy called again. Later in the evening, my boyfriend convinced me to sleepover so I take the early flight back to Kumasi the next day. It made a lot of sense so I slept over at his place. I was in bed with him when the guy called again.

The next morning the guy sent a text, “Sorry if I bothered you last night. I only wanted to know if you were having a good time.” I didn’t respond to that text too. Before I left my boyfriend’s place, he said, “There’s something I want to discuss with you.” I sat down and he sat next to me. I thought he was going to propose marriage because of the great night we both had. He said, “If I don’t tell you now, you’ll eventually get to know about it and that wouldn’t be nice. I am married. I’m married with two kids. It doesn’t mean anything. I still love you more than anything in this world and….”

I cut him off, “So you waited to sleep with me before telling me that you’re married, right? You think that’s the best way to treat a woman you say you love? I look very stupid in your eyes, right? You saw me and thought you could just have fun with me and later tell me this silly story? Well, I have news for you. Your wife would hear about us. I will ensure that. I will make you pay for what you’ve done to me.” I got up and began walking away. He tried to hold me back and ask me to stay. I threw my hand and it accidentally landed on his lips. I didn’t even look back. I missed the flight so I had to go to the trotro station to get a car back to Kumasi.

On the bus going back to Kumasi, I hatched a lot of evil plans to pay him back for what he had done; plans you can only hatch when you sit in a trotro that’s taking forever to get full. The first person to call me when I got to Kumasi was the guy I met on the airplane. I picked the call. He said, “Hey, what happened to you last night? I’ve been calling you.” I said, “Sorry about that. I couldn’t pick because of where I was.” We spoke for more than thirty minutes. That guy didn’t know me but he felt the sadness in my voice and kept asking if I was alright. I lied, “I’m alright.”

The following day we talked. He asked the same question. I said I was alright. He said, “You don’t sound like the girl I met on the flight.” For close to three months, we talked every day. One day he said, “I’m visiting Kumasi again, is it possible for us to meet?” I said, “Yeah, why not?” He came and we met at a pub around the stadium. Seated face to face at the bar he told me, “Do you know I came to Kumasi because of you? I don’t have anything to do here. it’s the thought of you that brought me here and I’m glad you made it possible for us to meet again.”

I was lost for words. I asked, “Are you serious?” He said, “You think I’m joking?” I said, “But why would you do that because of me?” He asked, “If I tell you why I did that, you’ll get up and walk away so I’ll reserve my thoughts.” I said, “Tell me, I can’t do foko.” He said, “I came to see you again because I think I’m in love with you.” I asked, “Where are you hiding your ring? Tell me I won’t get angry.” He asked, “What ring?” I said, “Your wedding ring. Are you not married? He screamed, “Hell no. Why would I do that? For what?” I said, “This is the least of the things you men can do when you want to chop a woman.”

He felt offended and I could see it from his face. I said, “Do you remember I told you I was visiting someone when we met on the flight? That guy was my boyfriend. I met him the second time that day and it was that day he slept with me for the first time. The next morning, he woke up to tell me he was married.” He screamed, “But that’s wickedness?” I said, “Yeah, very wicked but a man doesn’t care.” He said, “Then you’re right to think that of me. I’m sorry about what you went through.”

He stayed for three days and every day I went to see him at his hotel. I liked him too but I wasn’t ready to be a fool twice. When he was leaving, I asked when I was going to see him again and he said, “I’m always available for you. If you want me to come, I will come and see you.” One month later, I called him and said, “Hey, I’m in Accra. Do you mind if I pass by to say hello?” He said, “If it’s one of your jokes, please stop it.” I said, “Send me the location to your place and I will be there in the next few hours.” He did and in the next forty-five minutes, I was in his house in Dzorwulu. He pointed at a guy seated at the hall and said, “That’s my junior brother. He lives with me. My parents live across the street not too far from here, we can go and say hello to them.”

He asked, “What brought you to Accra?” I said, “Trotro.” He laughed out loud. “No, that’s not what I mean. I mean why are you in Accra.” I said, “I came because of you but don’t worry, I will go and lodge with a friend of mine and leave tomorrow.” He said, “You don’t mean it.” I said I mean it. He said, “You don’t have to go to your friend. I’ll get you a place to sleep.” The following day was a Saturday. He said, “Why don’t you go on Sunday?” On Sunday, he said, “Why don’t you go on Monday?” On Monday he said, “I hope you come back soon.”

The following weekend he called, “I’m in Kumasi, do you mind if I see you?” That day I said yes to his proposal. Some weeks later, I went to visit him and we went to see his parents. In January this year, I came to Accra to see him and I’ve never gone back to Kumasi again. We live together now because we got married in December last year.

Somethings don’t make sense until you get to the end of the story. Some journey leaves us in tears but at the same time connects us to people who can bring joy to our hearts. I’m happy with how things turned out and I’m happy with the way my story ended. Instead of looking back with tears in my eyes, I look at my husband’s face and think about how it all begun and I smile.