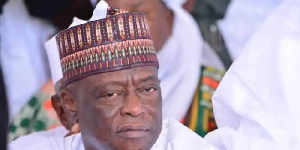 The owner of Max Airline, one of Nigeria’s aviation giants, and Afdin Petroleum, Alhaji Dahiru Mangal, known as DMB, was one of those recently conferred with Nigeria’s prestigious national honours.

However, when Mangal stepped out on Tuesday, October 11, 2022, to receive his national award, those with the knowledge of his real business, outside the aviation and oil and gas, felt President Muhammadu Buhari was rewarding a man who killed a vibrant sector of the country’s economy, the textile industry in Northern Nigeria.

The businessman, whose smuggling activities were well detailed in a book titled, “The Looting Machine” by Tom Burgis, an investigative journalist at Financial Times, was conferred with the honour of Commander of the Order of the Niger (CON).

Rewarding Mangal, an alleged smuggling kingpin by the President with CON, has confounded many Nigerians who believed that the administration’s war against corruption, though never taken seriously by critically minded observers has become a mockery.

“Many believed DBM is a shrewd businessman because he knows how to make money−whether legitimate or not. With little formal education, he has remained friends of presidents, governors, and politicians, as according to those in the know, he funds many political campaigns and installs governors,” a source told SaharaReporters.

“He was one of those who funded Buhari’s elections in 2015 and 2019, so we may not be surprised he is being rewarded for this.

“Though he inherited the importation of goods from his father, Mangal had chosen cross-border freights for his quick access to wealth.”

The Financial Times journalist, Burgis, in his book published in 2015, detailed how former textile workers became helpless after contraband from China, smuggled by Mangal, believed to be one of the eminent West Africa smugglers, had brought the textile industry to its knees.

He said, “In the shadier corners of the workshop of the world, Mangal found the perfect business partners.

“He was the conduit between Chinese manufacturers, who copied Nigerian wax and labelled them Made in Nigeria, and distributors.”

According to the book, the Nigerian Government repeatedly promised to bail out the industry, yet little assistance had been forthcoming. The more clear-eyed textile workers at the time realised that, in any case, the game was up.

With over 600 fleets of trucks involved in moving contraband goods into the country through Niger and Chad, Mangal never admitted he was into smuggling.

According to the book, he told Nasir El-Rufai, whom Olusegun Obasanjo, the former Nigerian President, had dispatched to talk to him about the need to change his line of business to something legitimate.

“Obasanjo was told, according to a consultant who was involved in lobbying the president, that Mangal was ‘the kingpin,’” Burgis wrote.

“Obasanjo dispatched Nasir El-Rufai, a northern-born minister with a reputation as a reformer, to try to get Mangal to clean up his act. El-Rufai told me he reached an agreement with Yar’Adua, the beneficiary of Mangal’s generous campaign funding and his political protector. The smuggler would endeavour to transform himself into a legitimate businessman.

“El-Rufai recalled that Mangal asked him, ‘Why does Obasanjo call me a smuggler? I just do logistics. I don’t buy any of the goods that are smuggled. I’m just providing a service.’ Mangal told El-Rufai that he had a fleet of six hundred trucks plying the trade routes.

“He promised to switch into refined petroleum products, another time-honoured money spinner for Nigeria’s politically connected trading barons. But the illicit textile trade continued, and Mangal’s operations remained under scrutiny.”

The Katsina-born billionaire was and is still managing a shadow economy that includes authorities and his political elites.

Many observers in the industry wonder why President Buhari, who prides himself as a man of integrity, would give National Honour to a man who has done more damage to the country than good.

Previous These are the most expensive World Cups in history
Next Economy: Petroleum Marketers threatens withdrawal of services over PMS increment on fuel price in Eastern zone