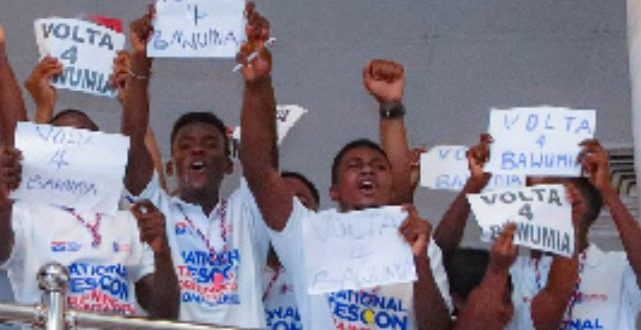 Vice President Mahamudu Bawumia arrived at the venue of a TESCON-Danquah Institute, DI, programme with the economy top of his agenda.

He had a voluminous document that will take him two hours to read to the packed hall and to Ghanaians across the length and breadth of the country and all over the world.

The New Patriotic Party, NPP< top brass were in attendance at the level of government and the party.

The party’s blue, red and white colours were pronounced given that the programme was organized by a students wing, other attendees also wore NPP branded T-shirts or attires with the logo embossed.

A moment of presidential aspirant politicking popped up when Bawumia completed his speech and was acknowledging cheers from a jubilant crowd.

Posters ‘campaigning’ for his candidature in the 2024 elections were flashed by a section of the ecstatic crowd. A very visible pro-Bawumia poster was ‘VOLTA 4 BAWUMIA’ inscribed on A4 sheets – which were flashed by many young people.

The NPP has in the past had cause to caution ‘aspirants’ to rein in their supporters to desist from campaigning to replace President Nana Addo Dankwa Akufo-Addo as flagbearer of the party.

The caution has been premised on the fact that such actions detract from the business of government and also has the tendency of degenerating into inter-party feuds that can affect cohesion and unity.

Bawumia remains one of the known frontrunners, even though his personal assistant, Gideon Boako, is on record as saying he will speak about his bid at the right time.

Other competitors believed to be eyeing the flagbearer slot are Alan Kyerematen, Boakye Agyarko, Owusu Afriyie Akoto and Joe Ghartey.