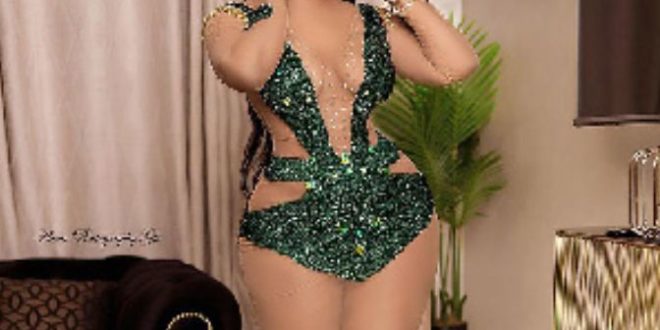 A picture shared by Ghanaian actress, Benedicta Gafah, has gotten the attention of social media users.

The actress shared a post on Instagram clothed in a see-through dress that was designed to cover private parts of her body, leaving some skin exposed under a light net fabric.

Benedicta’s green sparkly dress showed some parts of her breast and her thick thighs, not leaving how her proportioned curvy body appeared in them.

Her neatly combed back hair revealed her beat-up face that detailed her natural makeup presentation with a pose that defined her body.

It is not the first time Benedicta Gafah‘s fashion sense has caught the attention of GhanaWeb, as she has often been featured in the website’s top 10 fashionable stars in every week.

Social media users didn’t let Benedicta off the hook as several reactions were shared on her post.

A user shared a reaction saying, “Looking very tempting,” while another added, “You’re the most beautiful woman in the world wow.”

A third ascribed to her beauty with the comment, “Your parents must be so proud!”