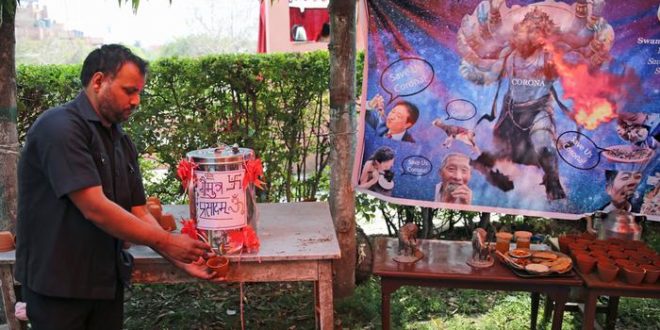 Dozens of Hindu activists in India hosted a cow urine-drinking party. Some members of Prime Minister Narendra Modi’s Hindu nationalist party have claimed that cow urine and dung can prevent and cure COVID-19.

The chief of the Akhil Bharat Hindu Mahasabha (All India Hindu Union) group hosted a cow urine-drinking event on Saturday in New Delhi, hoping that the practice staves off the coronavirus.

Many Hindus consider the cow to be sacred. Some leaders from Prime Minister Narendra Modi’s Hindu nationalist party have advocated cow urine or cow dung for its “medicinal” properties.

“We have been drinking cow urine for 21 years, we also take a bath in cow dung. We have never felt the need to consume English medicine,” said Om Prakash, one of the party attendees.

Suman Harpriya, a legislator in the northeastern state of Assam, told state lawmakers during an assembly session on March 2 that cow urine and cow dung could be used to treat COVID-19.

Experts have repeatedly warned that cow urine and dung, as well as certain traditional medicines, does not cure illnesses such COVID-19, also known as coronavirus, or cancer.

“There is no scientific validation that any of these traditional medicines work to prevent coronavirus,” virologist and traditional medicine researcher Debprasad Chattopadhyay told Germany’s Deutsche Presse-Agentur news agency. “Cow dung and urine are waste material, there is no test that validates or proves they are good for us,” he said.

COVID-19 currently has no known scientific cure and governments worldwide are struggling to contain the rapid spread of the pandemic which has so far killed over 5,000 people.

Chief of the All India Hindu Union Chakrapani Maharaj posed for photographs during Saturday’s party as he placed a spoon full of cow urine near the face of a caricature of the coronavirus.

Maharaj’s political party was established to protect the rights of India’s Hindu community and safeguard the Hindu religion.

Photographs of the event have circulated on online media in India. One photograph showed a party attendee pouring urine into a cup, right next to a poster depicting the coronavirus as an angry fire-breathing half-man-half-monster pursuing Chinese people who are photoshopped eating various animal meats and saying the words, “Save us corona!”

Many in the Hindu-majority nation of 1.3 billion consider cows sacred and in recent years have made several assertions about the liquid being an elixir

The spread of the coronavirus in India has triggered numerous controversial health benefit claims, particularly surrounding traditional medicines such as plant and mineral extracts and yoga. One example is the belief that applying two drops of sesame oil into the nostrils each day can ward off the coronavirus.

Baba Ramdev, one of India’s most famous yoga masters, said on February 22 that “if you practice yoga, your immunity increases which can help save a person in case they are infected with the virus. If immunity is low, the person cannot be saved.”

“Making random claims around treatment or prevention of the coronavirus through cow dung or yoga is irresponsible, whether it comes from the government or anyone else,” said Anant Bhan, a researcher in bioethics and global health.