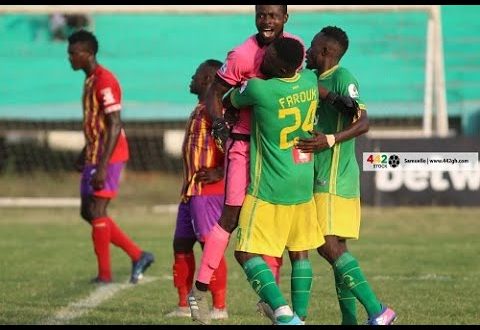 Aduana Stars defeated Hearts of Oak by a lone goal to pick the maximum points at stake at the Nana Agyemang Badu Park on Sunday, March 13, 2022.

Winger Sam Adams’ goal in the 45th minute settled the encounter on matchday 20 of the Ghana Premier League in Dormaa.

Aduana and Hearts of Oak hoped to win to maintain their winning run having won their last games against King Faisal and WAFA respectively.

But it was the fire boys who emerged as winners with a narrow win over the Ghanaian giants on home turf.

The much-anticipated game seemed to be balanced despite Aduana opening the scoring before the break.

The reigning Ghana Premier League champions were without influential midfielder Sulley Muntari who was unable to travel with the team to the Bono region because of injury.

And in his absence, the Phobians were unable to negotiate for a win or draw.

The two-time league champions defeated the rainbow boys to maintain their spot despite Great Olympics’ victory over Legon Cities.

Meanwhile, Hearts of Oak have dropped from the 5th position to the 6th due to the defeat.