Home / POLITICS / Here’s why J.B. Danquah was re-arrested and detained today in 1964 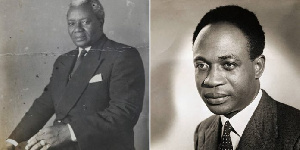 Here’s why J.B. Danquah was re-arrested and detained today in 1964

Several assassination attempts were made on Kwame Nkrumah

A look at the profile of J. B. Danquah

In GhanaWeb history class today, we bring you the story of the re-arrest and detention of Dr. Joseph Boakye Danquah, better known as J.B. Danquah, during the Kwame Nkrumah era.

On this day in 1964 (January 8, 1964), J. B. Danquah was re-arrested and detained for allegedly being implicated in a plot against the country’s first president, Kwame Nkrumah, after the assassination attempt by Constable Ametewee.

His arrest came against the backdrop of his alleged participation in Police Constable Seth Ametewee’s failed assassination attempt on Kwame Nkrumah on January 2, 1964, which got the bodyguard of Nkrumah, Salifu Dagarti Killed, reports ghanaianmuseum.com.

J. B. Danquah is said to be the first person who was arrested and detained under the Preventive Detention Act (PDA) on October 3, 1961, and released on June 22, 1962.

Danquah was allegedly found to possess his own signed hand-written speech which he intended for broadcast in the wake of the success of Police Constable Seth Ametewee’s attempted assassination on Nkrumah. 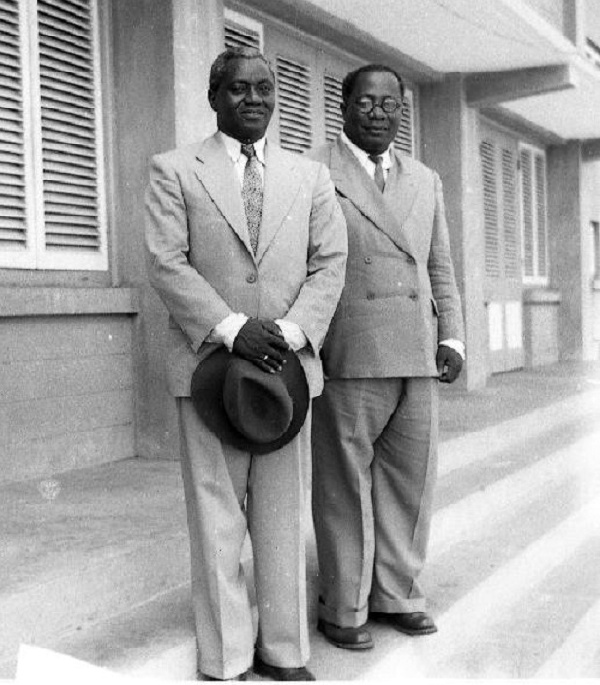 About J. B. Danquah‘s political career

He was born in December 1895 in the town of Bepong in Kwahu in the Eastern Region of Ghana (then the Gold Coast).

Danquah’s political journey started in London while he was a student at the University College of London where he was studying for a Doctor of Philosophy degree after obtaining a B.A. degree in Philosophy in 1925.

He participated in student politics while he worked on his thesis by serving as the first president of the famous West African Students’ Union (WASU) founded in August 1925 by twenty-one law students. Kwame Nkrumah was its Vice President in 1945.

Danquah steered the affairs of WASU which campaigned against racism and colonialism and fought for improved welfare for all African students in London.

Danquah was called to the bar in 1926 after entering the Inner Temple. In 1927, he returned to the Gold Coast (now Ghana) to start his private legal practice, only six years after his brother, Nana Sir Ofori Atta I, sent him to Britain to read Law.

J. B. Danquah’s pan-Africanist spirit was re-ignited in 1929 when he helped J. E. Casely Hayford to found the Gold Coast Youth Conference (GCYC). Two years later, he established the West Africa Times newspaper which was the first daily newspaper in the colony between 1931 and 1935.

A year later in 1947, he founded the colony’s first pro-independence political party, United Gold Coast Convention (UGCC), which was made up of academics, chiefs and lawyers including George Alfred Grant (Paa Grant), a timber merchant and politician who heavily funded the party; Robert Benjamin Blay; R. A. Awoonor-Williams; Edward Akufo-Addo; and Emmanuel Obetsebi-Lamptey.

Kwame Nkrumah was invited by J. B. Danquah to join the new party as general secretary after he was recommended by Gold Coast lawyer Ebenezer Ako-Adjei who had met him at Lincoln University and was familiar with his activism.

Nkrumah accepted the £250 salary and the boat ticket of £100 paid for by Paa Grant from Liverpool to the Gold Coast to assume the position of General Secretary of the UGCC.

Nkrumah’s invitation was purposely meant to establish the structures of the party in towns and cities across the country, a task Nkrumah executed tremendously.

Barely two months after Nkrumah’s employment, there was a riot and looting in Accra as a result of the killing of some ex-servicemen who were on a protest march. The colonial authorities pointed fingers at the UGCC and arrested six key leaders including Kwame Nkrumah and J. B. Danquah. They are popularly referred to as “The Big Six”.

The six leaders spent a month in prisons across the country although they had not organized the protest which resulted in the death of 29 people with 237 injured and £2 million worth of property damaged.

J. B. Danquah died at Nsawam Prison 13 months later on February 4, 1965, from a heart attack after having been detained without trial by the Convention People’s Party (CPP) government, led by Ghana’s first President, Osagyefo Dr. Kwame Nkrumah.

He was only honoured with a national funeral by the National Liberation Council (NLC) which overthrew Nkrumah in a military coup led by General Joseph Ankrah on February 24, 1966.

He descended from the royal family of Ofori Panyin Fie, once the rulers of the Akyem states, and one of the most influential families in Ghanaian politics. His elder brother was Nana Sir Ofori Atta I and his son is actor Paul Danquah. 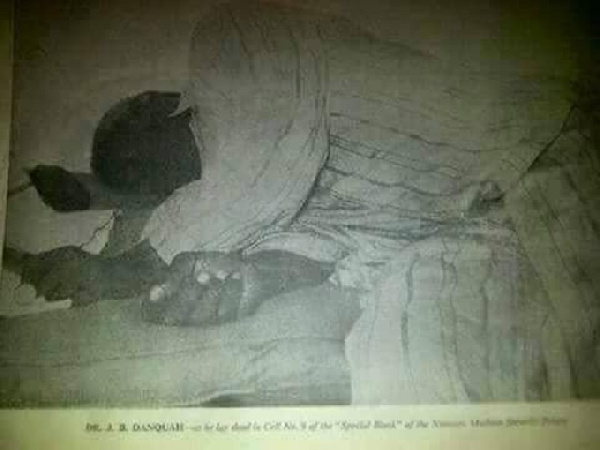 President of the Republic of Ghana,

I am tired of being in prison on preventive detention with no opportunity to make an original or any contribution to the progress and development of the country, and I therefore respectfully write to beg, and appeal to you to make an order for my release and return home.

I am anxious to resume my contribution to the progress and development of Ghana in the field of Ghanaian literature (Twi and English), and in Ghana Research (History and Culture), and I am anxious also to establish my wife and children in a home, to develop the education of my children (ten of them) and to restore my parental home at Kibi (Yiadom House) to a respectable dignity, worthy of my late father’s own contribution to the progress of our country.

You will recall that when in 1948 we were arrested by the British Government and sent to the North for detention they treated us as gentlemen, not as galley slaves, and provided each of us with a furnished bungalow (two or three rooms) with a garden, together with opportunity for reading and writing. In fact, I took with me my typewriter and papers for the purpose, and Ako Adjei also did the same, and there was ample opportunity for correspondence.

Here at Nsawam, for the four months of my detention up to date (8th January to 9th May 1964), I have not been allowed access to my books and papers, except the Bible, and although I was told in January that my application to write to my wife, Mrs Elizabeth Danquah, could be considered if I addressed a letter to the Minister of the Interior, through the Director of Prisons, I have not, for over three months, since I wrote to the Minister as directed on the 31st January 1964, received any reply, not even a common acknowledgment from the Minister as to whether I should be allowed to write to my wife or not. As I had no opportunity to make any financial provision for my wife and children at the time of my arrest, this delay in the Minister’s reply has made it impossible for me to contribute to the progress and maintenance of my wife and also for the education of my children as is my duty to the nation.

Secondly, you will recall that barely a month after our detention in the North in 1948 we were brought down to Accra and released to appear before a Commission of Enquiry set up to investigate the justice or otherwise of our arrest and detention. We duly appeared before the Watson Commission and made history for Gold Coast and Ghana. It resulted in the finding that the Burns Constitution was outmoded at birth, with a recommendation that our country should attain its independence within ten years, and that a Constitutional Committee (the Coussey Committee) should be set up to lay down the foundations of such independence and the steps to be taken towards its attainment.

In the present case, since I was arrested four months ago, I have not been asked to appear before any Judge, or Committee, or Commission, and, up to now, all I have been told is contained in a sheet of paper entitled “Grounds for Detention” in which I am accused that “in recent months” I have been actively engaged in a plan “to overthrow the Government of Ghana by unlawful means” and that I have planned thereby “to endanger the security of the State” (the Police and Armed Forces).

As no particulars of any kind were provided in the grounds for detention to indicate how the Government of Ghana came to formulate such a disgraceful charge against me, I spent in the prison here the greater part of January and February 1964 to write a review of the whole of my activities in “recent months” (roughly, from June 1962 [last release from detention] to January 1964). This writing was done by way of “Representations” in answer to the charge…

I confidently assure you, Sir, that when my representations reach you, it will be realised that my contribution in the said period of “recent months” to the intellectual and cultural achievement of the country was such that what should have been sent to me on January 8, 1964, was not a hostile invasion of my home and family, like enemy territory, together with my arrest and detention, but rather a delegation of Ghanaian civil officials and other dignitaries to offer me the congratulations of the nation and the thanks of the Government…

This, however was not to be, and I find myself locked up at Nsawam Prison in a cell of about six by nine feet, without a writing or reading desk, without a dining table, without a bed, or a chair or any form of seat, and compelled to eat my food squatting on the same floor where two blankets and a cover are spread for me on the hard cement to sleep on, and where a latrine pan (piss pot) without a closet, and a water jug and a cup without a locker, are all assembled in that narrow space for my use like a galley slave…

I am required to sleep or keep lying down on the blankets and a small pillow for the whole 24 hours of the day and night except for a short period of about five minutes in the morning to empty and wash out my latrine pan, and of about ten to fifteen minutes at noon to go for a bath. I am occasionally allowed to do a short exercise in the sun say once a week for about half an hour. That is all I have been engaged on in four months with my talents, such as I possess, going waste and my health being undermined and my life endangered by various diseases without being allowed to be taken to the Prison Hospital for continuous observation and treatment…

I am now left in a prison cell at the Special Block at the Nsawam Prison reserved for “dangerous criminals”, and I am being thereby effectively prevented from making any original contribution to the intellectual and cultural progress of our country…

I end as I began. I am tired of being kept in prison kicking my heels, and doing nothing worth while for the country of my birth and love, and for the great continent of Africa which was the first to give the entire world a real taste of civilisation… I trust you will accept this appeal for my release from detention in the spirit of utmost confidence and cordiality in which it is written, and I look forward to my early release from prison with the greatest possible faith, expectation and confidence.

Believe me to be,

Yours Very Sincerely and Respectfully 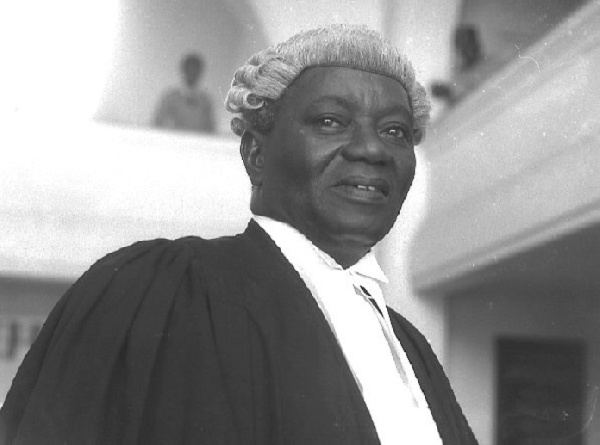 Tags 1964 AND arrested DETAINED Here's IN J.B.Danquah RE TODAY WAS Why