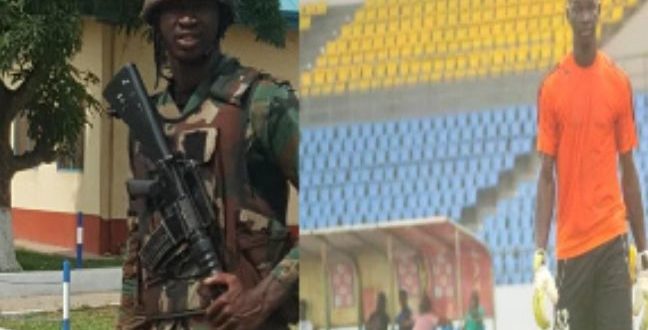 An officer of the Ghana Armed Forces Danso Wiredu Mensah is among players who have been banned by the Ghana FA for their role in match-manipulation plot between Ashanti Gold and Inter Allies.

Danso Wiredu Mensah who was the goalkeeper for Inter Allies in their game against Ashgold conceded seven goals in the fixed match played at the Obuasi Len Clay Stadium in a matchday 34 fixture of the 2020/21 Ghana Premier League.

Danso Wiredu Mensah was handed a 24-month ban in accordance with Article 34.5(d)(i) of the Ghana Premier League Regulations.

According to the DC, the goalkeeper failed to appear before the committee when he was handed an invitation.

The verdict from the GFA said, “video also showed that Danso Wiredu Mensah the goalkeeper for Inter Allies deliberately allowing the second and the fourth goals.

Mohammed Zakari during interrogation told the investigation committee that “Danso Wiredu was part of the network of individuals and players who acted to manipulate the match hence his obvious negligence and deliberate acts to allow the goals scored by Ashantigold players.”

“Of much interest is that Hashmin, Danso Wiredu Mensah and Mohammad Zakari are from the same club and stood as a front divided to the extent that one of them rendered their side uncompetitive or all of them.”

After joining the armed forces, the 28-year-old moved to Ebusua Dwarfs where he plays in the Division One League and also works at the Airforce Base in Takoradi.