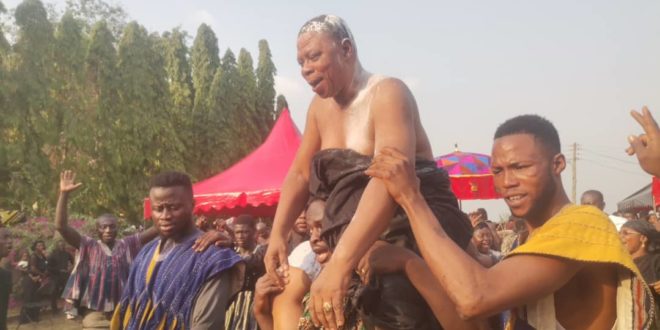 The Kuntenase Traditional Council have installed a Medical Director of a privately-owned Abotare Clinic  as “Twafohene” of the area.

The renowned Doctor, Mr Offei Amana was installed under the stool name, Nana Offei Amano I, in recognition of his immense contributions towards the development of the traditional area.

The event which was held on  Thursday January 19,2023, brought together hundreds of people who came to support the new chief.

“Let me use this opportunity to remind you that, as Twafohene for Kuntenase traditional area, one of your foremost duties is to go round and investigate matters that are brought before the council and advice us accordingly”.

“You will also be a core member of the council’s security by ensuring that, any action or move be it good or bad is reported earlier to the council for swift action”.

“The traditional council is very fortunate to have you as  Twafohene, we have absolute trust in you that, you will continue your good works to lift Kuntenase Traditional Council”. He said.

Nana Offei Amano I in an interview with OTEC News Jacob Agyenim Boateng expressed gratitude to the Paramount Chief of Kuntenase and his elders for the trust repose in him.

He pledged to work hard and contribute to the success Kuntenase has chalked so far.

“I am not oblivious of the arduous nature of the responsibility placed on me , but I know that I will succeed with the help and support of my traditional leaders and the good people of the Kuntenase Traditional Area”.

He disclosed that, Kuntenase will soon get a branch of Abotare Clinic to improve Healthcare delivery in the area.