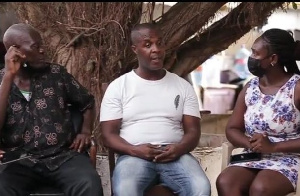 Great Grandson of Asafoakye Nettey founder of Accra Hearts of Oak, Darlington Nettey has revealed that the Phobians will continue to struggle both on and off the pitch for neglecting their traditional home over the years.

The Rainbow club has gone more than a decade without a domestic league title a development that has not gone down well with both management and supporters of the great club.

Accra Hearts of Oak enjoyed a remarkable form in the late 90s and early 2000s led by 6 straight league titles but they have failed to replicate that enviable feat in recent years.

Some past management members and followers of the club believe that the recent unfortunate happenings in the club are due to the total neglecting of the traditional home by the current administration.

The last time a powered management team of the club visited the traditional home of the club was in 2016 when former CEO Mark Noonan was in charge of the club.

Speaking to Untold Stories TV GH, Darlington Nettey insisted the misfortunes befalling the club is due to the abandonment of the traditional home of the club by leaders.

“They have neglected their traditional home because Hearts of Oak is like Israel and God,” he said.

“Whenever Israel sin against God, he punishes them until they repent from their sins then they are likely to be forgiven”

“They will come and we will do things for them and things will be going well, they will promise to come back but they won’t”

“But now if I may speak on behalf of my elders, they are angry with the top hierarchy of the club and we have promised to drag them out if they come here, “Darlington Nettey told Untold stories TV GH.

Tags continue Heart OAK OF SUFFER TO WILL

Previous I am not sick, it is poverty – Woman regrets marrying uneducated
Next Slay Queen calls out Jesus for help during pu$$y piercing; video goes viral