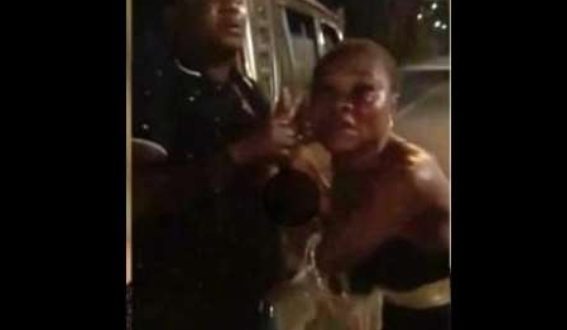 Share
The driver of an headmaster in one of the Senior High Schools in Cape Coast in the Central Region is currently in hot waters as social media users are calling on the Police to arrest him.

His crime is that he is said to have assaulted a woman alleged to be a commercial sex worker after patronizing her services.

The young man identified as Yaw was driving a government vehicle with registration number GV-127-16 when he reportedly gave punches on the sex worker.

In a video trending on social media, the lady who was seen on Cape Coast street narrated that the man after engaging in her service failed to pay the appropriate amount of money.

The sex worker thus refused to drop off from the man’s vehicle.

This infuriated the man, who angrily assaulted the lady publicly until another gentleman appeared on the scene and recorded the incident which has since gone viral on social media.

Meanwhile, some Ghanaians on social media have been expressing their views on the matter; calling on the Police to arrest the man after violently assaulting the woman who is reported to have sustained some bruises on her body.

Previous India accidentally fires missile into Pakistan
Next How to keep your kidneys healthy?