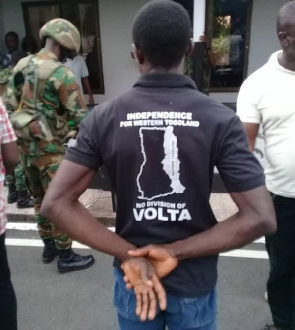 A Ho High Court presided over by Justice Eric Baah on Thursday struck out a habeas corpus application filed by the counsel of eight members of Homeland Study Group Foundation arrested for allegedly plotting to declare parts of the Volta, Oti and Northern regions as an independent state.

Mr Emil Atsu Agbake, counsel for the secessionists prayed that the eight be brought before the court to determine whether or not they were in legal custody.

Mr Simon Adatsi, Chief State Attorney argued that the application was not needed, and tendered copies of publications in the Daily Graphic and the Ghanaian Times newspapers as evidence to buttress his claim that the suspects were in legal custody.

He also told the court that the eight members were standing trial before an Accra High Court, and had been charged with treason felony, and that the leader had been granted a bail to the tune of GHC 250,000.

“An attempt at this moment to bring an application of this nature is like trying to shut the stable after the horses had escaped”, he stated.

Justice Baah, delivering the ruling, said due process had been followed in the arrest and detention as the respondents had proven that the secessionists were before a court in Accra, adding further that complaints should be addressed at the trial court.

He therefore dismissed the application on grounds that it lacked substance, saying “to avoid waste of time and resources of the state and the parties hereto, I truncate the process and dismiss the application as being without merit by reason of the changed circumstances.

“An application for habeas corpus is a wrong and unsuitable process to apply for the redress of the present concerns by the applicant”, Justice Baah stated.

The eight secessionists were arrested on May 05 in Ho following a meeting to declare parts of the Volta, Oti, and the Northern regions as a “Western Togoland state.

Three were earlier arrested together at Tokokoe in the Ho Municipality in 2017 for similar actions and were bonded by a Ho High Court.