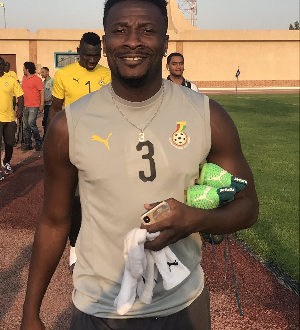 Legon Cities forward, Asamoah Gyan, says players of the Ghana Premier League club have held a meeting and identified the poor attitude of players as cause of the club’s poor start to the season.

The Royals have played two games this season; drawing 1-1 against Berekum Chelsea and lost woefully by three goals to nil to Accra Great Olympics, causing the sack of head coach Goran Barjaktarevic.

The 35-year-old Black Stars General Captain says it’s unfortunate the one-time Ghana Premier League winners have just one point after two matches, but will have to show aggression in their ensuing games.

“For me, I think it’s something about our attitude. We weren’t giving enough and I think the players have agreed with me,” he told the club’s TV channel.

“We’ve had a couple of meetings and everybody agrees with our attitude approaching games.

“It’s rather unfortunate that we’ve gotten one point out of two games. It happens, but what we need to do is we need to show our attitude and aggression that we want to win games.

“That is how we can win games.”

The former Liberty Professionals attacker is yet to debut for his new club since joining them in the off season on a season contract.

Legon Cities will host Medeama SC in match week two of the 2020/21 Ghana Premier League at the Accra Sports Stadium today at 6:00 PM.

Previous Adeiso SHS student who had 8As given scholarship to study abroad
Next Lilwin, Kumerica Stars to embark on peace walk ahead of elections