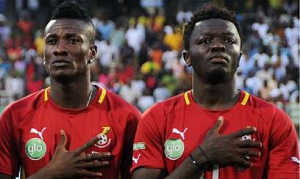 According to the U20 World Cup winner, the excitement of the Ghana league will bounce back should the duo decides to participate in the league.

Rumour had it that, the duo has been linked with a sensational return to the local league in the ongoing transfer window.

Muntari is rumored to be a subject of interest for Accra Hearts of Oak while Gyan, who is a boyhood Asante Kotoko fan is believed to be considering a move to the Porcupine Warriors.

“So if all these great players wants to come back I think it’s going to revive the game here” he ended.