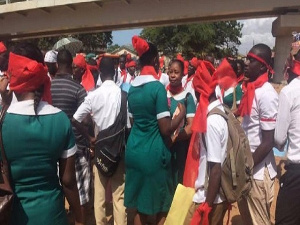 The Ghana Registered Nurses and Midwives’ Association (GRNMA)   has rejected the apology rendered by the Ashanti Regional Director of the   National Services Scheme Alex Opoku Mensah for verbally abusing a nurse at Manhyia Hospital.

The first vice chairperson for GRNMA in the Ashanti Region Mr Philemon Adu Brempong in a telephone interview with OTEC News Kwame Agyenim Boateng on Tuesday November 28, 2022 described the apology rendered by Mr Mensah as an “obviously reluctant and insincere public apology”.

An audio circulating on social media suggests Mr Alex Opoku Mensah has attacked a nurse at the Manhyia Government Hospital in the Ashanti Region following a scuffle between the nurse and his (Opoku Mensah’s) daughter who is a doctor on a horsemanship at the facility.

In the audio,  Mr Mensah was captured using unprintable words on the nurse during a heated argument.

Following the release of the audio, the Ghana Registered Nurses and Midwives’ Association (GRNMA) called on the government and the Public Services Commission to sack Mr Opoku Mensah for disrespecting their profession.

The Association called on the government to sack the NSS director adding that he is not fit for the position, thus should be sacked with immediate effect.

Following calls of his resignation, Alex Opoku Mensah to his social Media handles to render an unqualified apology to the public over his conduct.

Poku Mensah in his apology issued two days after the incident said he “understands the disappointment, and appreciates the inconvenience his action has caused the general public, and so want the nursing fraternity and thz public to forgive him”.

Mr Philimon Adu Brempong responding to the apology says the association will not accept it adding that the man would have come out immediately to apologize if he really felt remorseful on that Sunday.

He added that, they will withdraw their services in president fails to heed to their calls.

Previous Drivers who drive for more than 8hrs nonstop to pay over GH¢60k penalty – NRSA warns
Next 2023: Abia ADC blows hot over purported claims about its Guber candidate