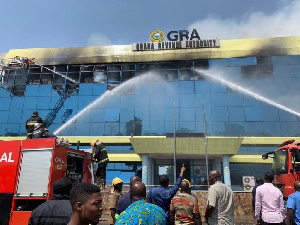 The Ghana National Fire Service (GNFS) has slammed the Ghana Revenue Authority (GRA) for ignoring a recommendation to enhance its fire systems to meet standards.

The Head of Public Relations of the GNFS, DOII Mr Ellis Robinson Okoe, told the Daily Graphic in an interview on Monday, December 2, that last year there was a fire audit report on the GRA’s Head Office Annex and the recommendations were that the authority should enhance the fire safety systems to meet standards, but “they didn’t follow them. If they had, I believe this situation wouldn’t have even occurred”.

“If there were smoke detectors and fire alarm systems, this fire wouldn’t have started,” he added.

DOII Okoe said the fire that gutted the facility was finally doused around 4 p.m. last Sunday, but firemen stayed around until Monday morning to ensure that the fire did not reignite.

He said the fire was severe because that part of the building was full of papers and chairs, in addition to a very windy weather which combined to fuel the inferno.

He added that the rooms were divided with plywood, another combustible material which fuelled the fire.

The fire safety apparatus in the building was also weak, he said, adding that there were no smoke detector alarms and other sophisticated tools.

“Such systems could have helped detect the smoke earlier and allow for immediate attention that could have prevented the fire from getting to that extent. In such facilities, it is advisable that they have such mechanisms in place because anything can happen without people noticing,” he advised.

The GNFS on Monday, December 2, launched full-scale investigations into the fire that gutted the Head Office Annex of the Ghana Revenue Authority (GRA) along the Ring Road Central in Accra last Sunday.

One of the investigators, DOII Mr Stephen Pobee of the Operations Directorate of the GNFS, told the Daily Graphic that the team had spoken to two security men who were at post at the time the fire started.

He said they were yet to speak to a cleaner, who was the last to enter the building before the fire was detected.

Mr Pobee could not confirm when the investigations would be completed, but gave an assurance that the service would do everything possible to get to the bottom of the matter.

He added that at the moment the building was very weak and unsafe for use, as some particles had started falling off.

Situation on the ground

The Daily Graphic visited the fire scene around 11 a.m. yesterday and realised that the place was deserted, with a few officials of the GNFS conducting some assessment.

There were also some policemen and some Customs officers guarding the premises to prevent unauthorised entry into the building.

The second floor of the building was a wreck and covered with soot, but no smoke was seen coming from the building, which indicated that the fire had been doused completely.

The slip road in front of the building which serves as one of the exit routes from the Ring Road Central, had been closed to traffic.

The GRA last Sunday afternoon said the fire razed its information and communications technology (ICT)?centre, which was housed in the head office annex, also known as the VAT House.

The acting Commissioner-General of the authority, Mr Ammishaddai Owusu-Amoah, said no data were lost in the fire, as the authority had a back-up and an emergency recovery system on remote servers.

The acting Head of Communications and Public Affairs of the GRA, Nana Birago Owusu-Ansah, confirmed that some of the burnt items were computers, documents, air conditioners and furniture.

Asked about the fire audit report, she said she did not have any idea about it and was yet to confirm.

She advised all taxpayers who used to transact business at the VAT House to now head to the Kinbu Sub-Large Taxpayer Office located at the GRA Head Office, Ministries.

It took firemen from the GNFS about six hours to bring the fire, which started around 4 a.m., under control.

The casualty did not go beyond two firemen who sustained injuries and were treated and discharged.

A report from the GRA indicated that the fire caused extensive structural damage to its ICT centre but that its data were safe, while no loss of cash or cheques had been recorded.