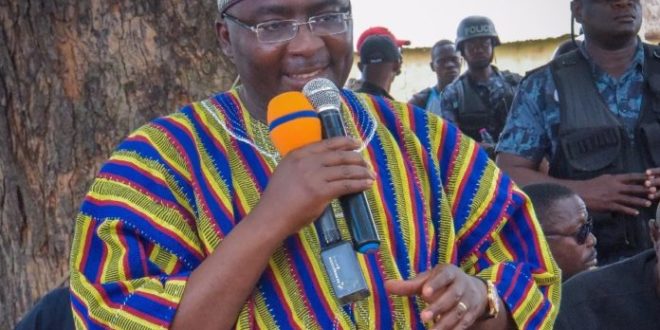 According to him, customers of Menzgold do not deserve compensation because they failed to heed calls by regulatory agencies to stop doing business with the gold firm.

Flagbearer of the National Democratic Congress (NDC) John Mahama says he will pursue the Chief Executive Officer for Menzgold Nana Appiah Mensah popularly known as NAM 1, to retrieve held up investment of customers if he wins the December polls.

Speaking at Tarkwa-Nsuaem in the Western Region, Mr Mahama wondered why the Akufo-Addo government does not appear to be interested in confiscating the properties of NAM1 but rather venting their anger on customers.

“What is so special about NAM 1 that Akufo-Addo is shielding him? Why do you unleash the police on innocent customers while NAM 1 walks free,” he fumed.

He assured that his next government will thoroughly investigate NAM1 and his directors and use all legitimate means to retrieve the funds.

The Circuit Court in Accra presided over by Her Honour Ellen Asamoah on September 7 adjourned the case in which Chief Executive officer (CEO) of Menzgold Nana Appiah Mensah (NAM1) has been adjourned to October 1, 2020.

The State had previously on June 24, 2020, filed new charges against NAM 1 at the Accra Circuit Court.

Assistant Superintendent of Police (ASP) Sylvester Asare then told the Court that his directives were that he should hold on to the new charges and the plea taking of the accused.

On July 20, ASP Asare told the court that, they were seriously working to advise the court on the matter.

To this end, he prayed the court for a long adjournment after which they would have been able to advise the court on their intention of prosecution on the matter.

He said when the advice is ready, they will issue hearing notice to the accused persons to appear before the court to to do the needful.

But in court on Monday, prosecutor prayed for an adjournment and it was granted.

The accused person NAM 1 was present in court.

The Circuit Court on July 26, 2019 granted NAM 1 bail in the sum of GH¢ 1 billion cedis with five sureties, three to be justified.