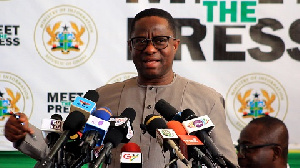 The government has revealed that it has cleared over 2 billion Ghana cedis debt owed the Electricity Company of Ghana (ECG) which will, therefore, put the state-owned electricity distributor on the requisite sound financial footing.

Addressing a press conference Tuesday, the Energy Minister, John Peter Amewu stated that the government has cleared its debt with the ECG with a credit of 500 million Ghana cedis.

“In 2016 when the NDC left power the total amount owed the ECG was 2.63 billion Ghana cedis. The NPP on the assumption of office ensured it was current on all the bills incurred from 2017 to date…President Akufo-Addo has paid 2 billion annually to cover bills to ECG.

“All bills have been paid to ECG with a credit of 500 million,” Mr Amewu added.

Meanwhile, Ghana has recorded 183 more cases of COVID-19 taking the country’s case count to 5,918, according to latest figures released by the Ghana Health Service.

Two more people have been confirmed dead from the deadly virus taking the death toll to 31. There have been no new recoveries as the number still stands at 1,754.

Count of Cases per Region

Previous Police hunts for killers of DCE driver, two others
Next Why Amansie South DCE paid GH¢ 5,000 to armed robbers