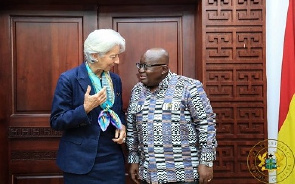 Government is preparing to sign a social partnership agreement with members of the National Tripartite Committee (NTC) and key stakeholders in the labour sector to consolidate relations between the various social partners in the post International Monetary Fund (IMF) era expected to begin April 2019.

The members include organized labour under the Trades Union Congress (TUC), the Ghana Employers’ Association (GEA) and Government itself.

According to President Nana Akufo-Addo, in his State of the Nation address to Parliament yesterday, “this agreement is expected to provide a medium for building a sense of cohesion, trust, self-management and open discussions to spearhead the course of development in the country”.

The new initiative will particularly seek to involve all the partners in designing and implementing initiatives that would significantly improve labour productivity and ensure that workers enjoy some of the resultant benefits.

It will also aim to establish a structured platform for both labour and private sector employers to contribute their ideas to economic policy, where it could affect the fortunes of workers, unlike the current situation where organized labour in particular only gets involved when its dissatisfaction with a public policy initiative creates the possibility of worker unrest.

The NTC and Standing Negotiating Committees are among the key social dialogue structures that have mostly focused on the national level and enterprise level of industrial relations.

The tripartite social dialogue is established by the Labour Act (Act 651) 2003, through the NTC -a body mandated not only to determine the national daily minimum wage, but also to give advice on employment and labour market issues as well as consulting with partners in the labour market on matters of social and economic importance.

However, the Committee has over the years focused exclusively on minimum wage determination, with minimal attention given to tackling other key areas of its mandate which have been relegated to the background.

Instructively, none of the industrial actions engaged in by various labour unions every year result from dissatisfaction over the minimum wage. Indeed, many of them are not directly the result of renumeration disputes at all.

The increase of consensus building on socio-economic and development issues therefore cannot be attributable to tripartite consultation, a situation which makes government nervous that consensus built could prove fragile when put to the best. This is largely the reason behind the planned strengthening of the social partnership agreement as announced by President Akufo-Addo.

Some experts in the sector have maintained that the nature and scope of work of the Committee is restricted, making it unlikely to focus on other key important areas of their mandate such as employment generation and matters affecting the economy.

Therefore, the new initiative will aim to create a platform for three-way consultations on a variety of crucial issues starting with ways to improve labour productivity in Ghana which foreign investors in particular complain is inordinately low.

The Labour Act makes provision for the NTC to establish sub-committees at both the regional and district levels. However, the national tripartite dialogue has mostly been centralized, and this some stakeholders have said is preventing the committee from fulfilling all its mandates.