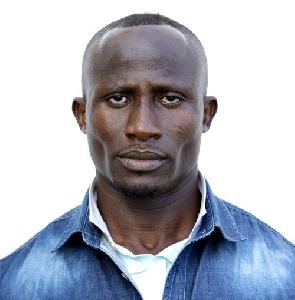 Government has explained the former bodyguard of President Nana Akufo-Addo who was filmed secretary allegedly training a militia group at the Osu Castle, was illegally using the facility for his personal private business.

Minister of Information Kojo Oppong Nkrumah said Friday that the man, Nana Wireko Addo, was initially given access to the Osu Castle as a member of government task-force assigned to retrieve state vehicles from former government officials.

Though he has since August 2018 completed that job, Mr Oppong Nkrumah claimed Nana Wireko Addo unlawfully arrogated the office to himself without recourse to government.

He was “assigned an office there [Osu Castle] to work with a taskforce to retrieve landed properties and vehicles in the possession of officials of the erstwhile Mahama Administration” the Minister explained.

But Mr Oppon Nkrumah said Wireko Addo subsequently converted the office allocated to him into “a private business office for the stated purposes of his company”, De-Eye group, said to be affiliated to the government.

“Admittedly, this should not have been allowed to happen in the first place,” he told journalists at a news conference in Accra to respond to the investigative documentary by journalist Manasseh Awuni on the activities of the group.

Earlier government categorically denied no group was operating from Osu Castle, which was until 2012 the seat of government.

“My checks from National Security have revealed that no such group is operating from the Castle,” Mr. Eugene Arhin, Director of Communications at the Presidency told responded to a query from Manasseh before the airing of the documentary titled ‘militia in the heart of the nation’.

However, the statement by the Information Minister admitted the operation of the group at the Castle, but claimed they are not members of a militia group as suggested by Manasseh in the documentary.

“…they are in the business of helping people find jobs,” he stated, adding “This is an important fact which government believes had to be stated to viewers and listeners”.

Mr Oppong Nkrumah claimed when the matter of De-Eye group came to the government’s attention, the issue “was quickly dealt with” with the eviction of their members from the Castle in October 2018 by a joint team of national security and police.

But Manasseh has since provided evidence to show that the group as at December 21, 2018 was still operating from the Osu Castle. The group on the said date held its end of year get-together at the castle gardens.