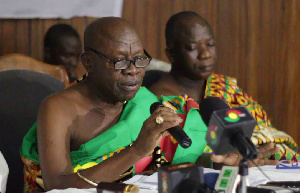 President of the National House of Chiefs Ogyeahohuo Yaw Gyebi II, who doubles as the Paramount Chief of the Sefwi Anhwiaso Traditional Area in the Western North Region, has called on the National Democratic Congress (NDC) to use legitimate means in defending their rejection of the December 7’s presidential election results.

He has avidly appealed to the leadership of the opposition party to consider going to court to seek redress instead of inciting the public and the party’s supporters to hit the street in protest against the Electoral Commission, Ghana (EC).

Ogyeahohuo Yaw Gyebi II in an interview on Yen Sempa on Onua FM on Friday, December 11 expressed fret over disconcerting comments made by the leadership of NDC after the declaration of the election results by the mandated institution responsible for Ghana’s electoral processes, EC.

He maintained strongly that it is only the court that has the power to justify whether there were irregularities or abnormalities in the election, hence the need for any party to go to court if they believe they have a genuine case.

Ogyeahohuo Gyebi II fervently urged NDC to emulate the New Patriotic Party (NPP), which challenged the 2012 general elections results in court when they felt the people’s mandate was subverted.

“There is the law and so if any individual or group of people think that their rights have been trampled upon in any way, they should go to court instead of inciting the public against a mandated institution,” he said in Twi.

He hinted that the National House of Chiefs and other stakeholders are yet to meet to issue a statement to that effect.

He admonished the youth to stay away from acts that have the tendency of destabilizing Ghana’s peace.