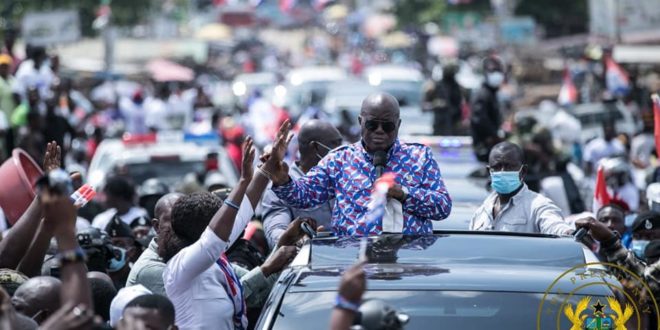 President Akufo-Addo has appealed to Ghanaians to give him an emphatic victory as the country goes to the polls on December 7.

The President made the appeal when he addressed the chiefs and people of Santa Maria in the Anyaa Sowutoum Constituency during his stopover there as part of the day one of his two-day campaign tour of the Greater Accra Region.

According to President Akufo-Addo, his party, the New Patriotic Party, “has a blueprint for the development of the country and a strong vote for him will ensure that the strong foundation he has laid in his first term will see the actual building being built on it.”

“We have laid the foundation in Akufo-Addo’s first term and in the second term, we going to get on with the transformation of Ghana to bring prosperity to our country in a way that we have never seen before. That is why I need a strong majority in Parliament and a strong vote to give me the confidence and the strength to carry out the programme of economic development of our country,” President Akufo-Addo stated.

The Minister for Trade and Industry, Alan Kyerematen, when he took his turn to address the gathering indicated that the significant amount of work undertaken by President Akufo-Addo’s administration, requires that the Ghanaian people repose their confidence in him once again and vote massively for him in the 2020 elections.

“If you have been in government before and you are seeking another mandate from the people, what we have to ask you is when you were coming, what were the promises you made. It is based upon this that you would be asked to give account for your stewardship,” he said.

The Trade Minister continued, “I was with Nana Addo during the entire 2016 campaign season. If you remember, he said that if given the mantle of leadership, he would introduce Free SHS. Has the promise been delivered or not?”

To this the massive crowd at the market responded, “It has been fulfilled.”

Touching on the reduction of unemployment, Alan Kyerematen noted that the introduction of policies such as the Programme For Planting for Food and Jobs, 1-District-1-Factory, and NABCO have considerably reduced the unemployment rate in the country. He cited that the latest Ghana Living Standards survey states that the rate of unemployment, which stood at 11.9% in 2015, dropped to 7.3% in 2019.