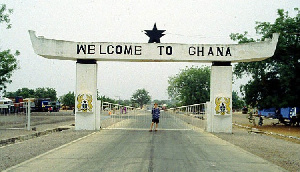 GIS launches manhunt for 3 over illegal entry into Ghana

A serious manhunt is underway for the driver and two passengers on board an Opel Astra with suspicious registration number plate, ‘GG 477 – 14’, who abandoned the vehicle after it crossed into Ghana from Togo, through an unapproved route near the Nyive Border Post last Friday.

The incident happened on Friday, April 17, 2020 along the Hodzogah-Takla stretch of the frontier.

Assistant Inspector of Immigration Felix Klu-Adjei, who is in-charge of the Ghana Immigration Service (GIS) Public Affairs in the Volta Region, disclosed these to the Ghanaian Times at the weekend.

He said that was after the Nyive GIS Sector Commander, Superintendent Justice K. K. Setordjie received an intelligence report concerning the activities of cross border criminal syndicate who were about to strike at the border.

According to him, while the vehicle was being chased by personnel of the Ghana Immigration Service as soon as it crossed into Ghana from Togo, the driver and the two other occupants hopped off the vehicle and fled into the nearby bush, on the Ghana side of the frontier.

The vehicle was impounded and later handed over to the Custom Division of the Ghana Revenue Authority (GRA).

“It is believed that the vehicle was smuggled from Togo,” Assistant Inspector Klu-Adjei added.

In a related development, the Nyive and Shia commands of the GIS have since the closure of the frontiers intercepted five motorcycles from various unapproved entry points in the Volta Region.