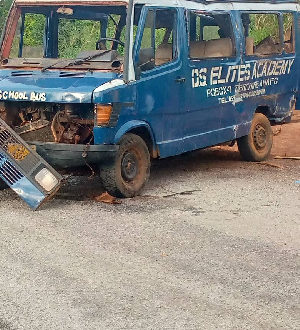 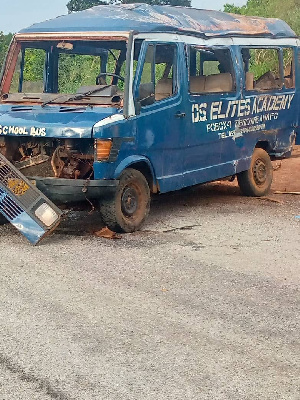 It is being reported that some children on board a school bus with about 50 pupils in the Tano North Municipality of the Ahafo Region have died after a ghastly accident.

According to a post made by a Facebook user, Andy Frimpong Manso, the fatal accident happened on the Terchire-Adrobaa Road.

He said, in a caption accompanying a video, that several others have sustained critical injuries.

“A School Bus boarding about 50 Pupils has been involved in a fatal accident on the Terchire~Adrobaa Road in the Tano North Municipality in the Ahafo Region.

The Facebook user also indicated that the accident came about as a result of the bus driver over-speeding on a road that was still under construction.

“I’m told the driver was driving on undeserving top speed, knowing very the road is under construction with first phase of surface dressing (Prima seal) being layed.

“In such areas, drivers are being cautioned to drive carefully due to the nature of the chippings and how slippery it could be.

“Sources say, he deified all cautions, even to that of the school pupils, asking him to slow down,” he added.

It is unclear when exactly the incident happened, but the post was made by Andy Frimpong Manso on Friday, November 11, 2022.

However, the police are yet to comment on the matter.